David Stowell and George Black‘s The Veganopolis Cookbook (Agate 2010) is a collection of vegan recipes first made popular at the authors’ vegan restaurant in Portland, Oregon.

Unlike many vegan cookbooks, this is a restaurant cookbook not an introduction to vegan cooking. Offerings include American homestyle favorites like Cinnamon Pecan Rolls (p. 110) and Classic Pot Pie (p. 178) alongside regional specialties including French Seven-Vegetable Soup (page 52) and Puerto Rican-Style Three Bean Stew (page 185), The Veganopolis Cookbook is a diverse and varied collection of vegan meals. Just as its book jacket promises, the recipes inside The Veganopolis Cookbook are not “ground-level vegan cooking” and offer “ambitious” selections from breakfast to dinner to dessert. The recipes, though sometimes lengthy, are described with clear and concise directions and are made to impress. These may not be weekday, already-in-your-pantry meals, but the payoff is certainly worth your time and an extra trip to the grocery store. 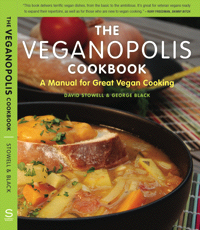 This morning, encouraged by Stowell and Blackʼs promise of a “quick” and “easy” breakfast, I made Vegan French Toast and Good-Day Hash Browns (p. 112-113). The recipes were elaborate and the flavors rich; they could have passed for a restaurant breakfast! Food was on the table quicker than a trip to Portland, but I’ll still admit that by the time I finished preparing both dishes, breakfast had turned into brunch!

The Veganopolis Cookbook is a great collection of recipes for long weekends, holidays, and any time you feel like preparing a special meal