Jack Witherspoon: Twist It Up

Twist It Up (Chronicle 2011) is a cute children’s cookbook written by an 11-year old boy, Jack Witherspoon and his mother Lisa Witherspoon. He knows how to cook well. He watched his mother and he watched the Food Network – and somehow he started to do it himself, practicing, and improving. Throughout the book he gives the reasons he choose the recipes he includes. For instance, on the creamy pesto pasta recipe he says in the note, ”The flavors of he basil and garlic paired with the pine nuts are so awesome.” And more. 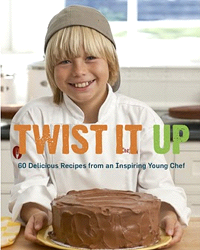 The book starts with how Jack got into cooking because he had leukemia- he watched the food shows while in the hospital. He decided he wanted to grow up and become a chef. His mother told a friend who owned a restaurant, and they offered to host a fundraiser, in which Jack would be the chef. He eventually got better, and went back to school – after missing almost all of first and second grade – but continued to fundraise, meeting celebrity chefs, and help cancer research with the Jack Witherspoon Endowment at the Miller Hospital.

My favorite recipe is Jack’s Spaghetti Alla Carbonara (p. 102), which is a lovely looking dish of pasta with pancetta. My second favorite dish is the creamy pesto pasta (p. 70) because I love pasta- but I usually don’t add cream to mine. My third would be he Old Fashioned Apple Pie (p.132) – but he uses store bought pastry instead of having fun making (and eating) homemade buttery pastry. Tarragon Chicken Salad (p. 34) with sour cream and cranberries would be fun to make with left-over turkey.

All the dishes have photographs by Sheri Giblin. There are also plenty of photos of Jack – and his friends, but luckily none of Jack when he was sick. It is good to know he is healthy and eating healthy food. It is also amazing that a kid can put on fundraisers, decide to be a chef, and write a whole book. Part of the proceeds from the sale of the book will go to Jack’s charity – totally cool.