How important is eating right?

The Gulps (Little Brown 2007), with a story by Rosemary Wells and illustrations by Marc Brown, is about a family of obese, junk-food obsessed rabbits who leave home to go on vacation to Dizzyworld for roller coaster mania and deep-fried Devil Dogs.

They never get there. 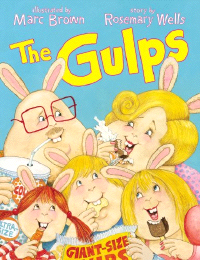 Instead, their car breaks down under literally their weight and they end up stuck on Farmer Spratt’s farm. You know — “Spratt can eat no fat” — but in this case, neither does his wife and everyone else on the farm. The Gulps learn to eat their greens and end up enjoying themselves. Say “no” to Belly-Up Burgers and Porker Heaven, and “yes” to Salad Circus.

Even though this is a picture book Eric Schlosser would endorse, it manages to be hilarious not preachy. The illustrations are cute and silly, and the story is full of embarrassing moments kids will appreciate. It is a good way to remind all kids (and their parents) that exercise and good nutrition are important for everyone and that it is possible to change, loose weight, and eat a healthy diet.

Super Chef talked to Rosemary Wells about The Gulps:

Super Chef: Have you writtern other books before about eating well or food?

Rosemary Wells: There is food in all of my book. I am a cook. My daughter went to cooking school in Chicago. I really like to eat well. I grew up with European parents. They loved to eat well — even in the 50s we ate lots of fruit and vegetables.

Super Chef: Have you worked with Marc Brown before? How did that happen?

Rosemary Wells: We have known each other for a long time. We were having dinner together to talk about a different project. Suddenly we started talked about what we were eating: “Wouldn’t it be nice if American kids could have this salad and striped bass? Maybe we should do a book called Good Food, Bad Food.” Everything I write is a soap opera, and it became The Gulps.

Super Chef: Why are animal characters so important in telling this story?
Rosemary Wells: It removes the level of disbelief. It puts your characters in a land that is less personally offensive and less familiar. The Gulps look like people. They are people with bunny ears. You can play with it when it is about animals.

Super Chef: How do you want parents to use the book?

Rosemary Wells: Everybody who reads the book to a child has their own interpretation. Maybe they’ll ask: does that look like anyone you know? They have to let the children respond.

What I am hoping is that people will say: that looks like us. We should get Outside and exercise more; eat better. The book will not change the world. I would like to see teachers use it in the classroom. Teachers will be able to read to 20 kids at a time, not one. They can have a good effect if it’s connected to the curriculum. There is a movement in schools to change, to bring better food to the lunch table. Some schools are serving sweet potatoes instead of French fries. It’s a start. They should be congratulated.