Ace of Cakes: Inside the World of Charm City Cakes by brothers Duff and Willie Goldman (Harper Collins 2009) is an unabashed fan book, chockablock with photos, bios and even grammar school pictures of the cast of the Food Networks quirky show. Don’t look for a cake recipe in this book; cake baking has always been beside the point. Ace of Cakes is about sculpture in a reality TV setting with an unusual product, cake, not about the cake itself. 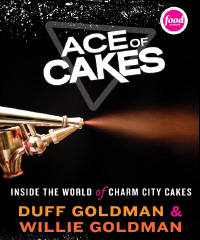 On the inside flap is a floor plan of the Ace of Cakes set, and cut out head shots of the cast like a 60s teen movie. The cover shot shows a spray gun shooting red color (presumably on a cake). It’s sleek, fun, and makes you want to get into the action. It sets the tone for the photography and layout, goofy, irreverent, and fun.

If we were ever to attempt a book, it was critical that we approach it the same way as we do a cake, always mindful of the goal: to make the customer happy. Provide you with plenty of eye candy and feed the creative spirit in both kids and the kids inside us all. (p. 1)

Each of the cast members relates how they met Duff and special or infamous moments on the show. There is plenty about Duff and his brother Willie and Duff’s career as a graffiti artist. The essays, though often funny, are also insightful. Duff writes about learning about negative space in art, paint, and attending the Culinary Institute of America. They seem intended for young readers who might be considering similar careers.

If you have a stack of questions waiting Duff or anyone else involved in the Ace of Cakes, you’ll probably find answers in this book. But then, you’ll wonder about how to make all those cakes, and find yourself in line for the next Duff and Willie book.

One comment on “Duff & Willie Goldman: Ace of Cakes”