Menzel & D’Aluisio: What I Eat

What do we know about other people around the world?

In many classrooms teachers take advantage of the immigrant nature of America and kids learn about the beliefs, customs, and language, and perhaps the cuisine of classmates from different countries.

But what about learning about people from distant lands and finding out about what their lives are like where they live?

Photographer Peter Menzel & writer Faith D’Aluisio‘s marvelous What I Eat: Around the World in 80 Diets (Ten Speed 2010) accomplishes that tour with the help of stunning photos and in depth text. 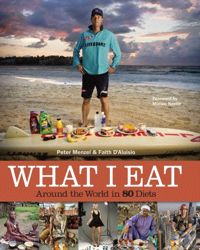 The authors have profiled people from all walks of life, all over the world by asking them to show what they eat in a day. The profiles start with the lowest calorie count – Nookisaruni Tarakuai, The Maassai Herder who survives on a meager 800 calories a day – and climbs to the highest – Jill McTighe, The Snacker Mom who manages on 12,300 calories a day. In between these two extremes are fascinating stories of the lives of people around the world through what they eat.

Most of the essays are not restricted to food, but cover family life, career, and school. The photographs show the towns they live in, the food they eat and how they live. The calorie counts allow the authors to organize the diets – but the extremes are telling. One of the youngest people profiled is Alamin Hasan, The Runaway Train Porter a slight 12 year old living in Dhaka, Bangladesh who survives on a mere 1,400 calories a day. He is pictured with two dishes of curry and rice, tea, a roll and four cigarettes. There are also photos of him sleep on a concrete bench in the railway station, hanging out with other street children, and cooking a meal in a lean-to.

Although most of the lowest calorie counts profiles are in the third world, Mackenzie Wolfson: The Weight-Loss Camper at 1,700 is American. The teenager recounts how she gained weight and works hard to slim down from 299 pounds. There are more fun profiles like Leland Melvin: The Astronaut at 2,700, and Miyabiyama: The Sumo Wrestler at 3,500 calories a day.

The most interesting may be the stories that were hardest for the authors to get, like Saada Haidar: The Homemaker. She is a Yemeni housewife living in Saana. There are photographs of her room with the meals of stew and bread, tea and vegetables are laid out on the floor while she stands, dressed in a black abaya covering everything but a slit for her eyes, with a woman reading the TV news in the background. There are photos of the souk, pastries, and mounds of spices, and one incredible picture of three women in abayas and straw hats called nakhls, with their white goat in the dessert.

What do we know about other people around the world? If you cannot speak their language, and you have not studied their history, then What I Eat demonstrates how much we can learn from what other people eat.