I Feel Better with a Frog in My Throat

I Feel Better with a Frog in My Throat (Houghton Mifflin 2010) is about the strangest cures of the past, and some modern ones, too. I will discuss whether the cures work and, if they did, how they work.

The cures come from the ancient Egyptians, Romans, Greeks, Neanderthals, and 17th-19th centuries. One of my favorite cures that didn’t work was “Mummy Powder,” which is supposed to cure wounds. The author writes that the ancient Persians used up so many mummies that they had to take recently buried bodies out of graves and grind them up instead. They sold it around the world.

My favorite cure that worked was spider webs:  they are supposed to stop bleeding. They work by staunching the flow of blood and sometimes attract penicillin and other germ-attacking funguses. 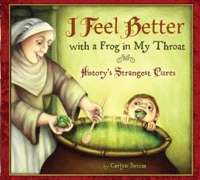 The strangest cure that worked was a dead man’s skull, which grew usnea, which is a penicillin-like mold that stops infection. Another was eating dirt to help with stomache aches. Eating medicinal dirt started in Ancient Greece,  China, and North America. Why does dirt work? Because some dirt has clay in it, and clay has magnesium, which helps settle the stomach.

The illustrations by the author Carlyn Beccia are very funny, especially for certain cures like cherry bark, puke weed, and frog down the throat.

I recommend this book for boys about seven years old, but I think some nine-year-olds and ten-year-olds (like me) would love it, too.

I think this book is very good, because it is a reliable source of information you could use in real life.