It is always a pleasure to find another cookbook that explores Turkish cuisine on the market. Turkish cuisine is so varied and rich – much of it is still unknown outside of Turkey.

Nur Ilkin and Sheilah Kaufman‘s The Turkish Cookbook: Regional Recipes and Stories (Interlink 2010) is an important addition – and a lovely cookbook. It focuses not on Ottoman cuisine and restaurant Turkish cooking, but on regional cuisine and home cooking.

Nur, wife of the former ambassador to the United States and the UN, is an able and enthusiastic guide. She is very familiar with the cuisines of the countries where her husband has been stationed – and sometimes adds exotic ingredients that are not native to Turkey to some her recipes. She writes with pride about the place of Turkish cuisine in the world. Each recipe comes with head notes about Nur’s memory of a dish or how her family ate it.

After a long essay on the history of Turkish cuisine, the book is divided by geographic region: Black Sea, Marmara, Aegean, Mediterranean, and so on with plenty of photographs of Turkey and finished dishes of food, most by Juliana Spear. Within each regional chapter, the recipes are divided up again – mezze and salads to desserts from the region. 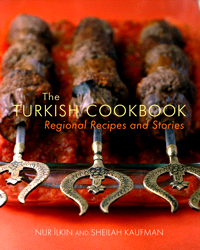 The Marmara region is probably the most familiar to those who have eaten at Turkish restaurants or visited Istanbul. Yet, even in this chapter, many of the recipes are less common and some are very untraditional. The White Radish Salad (p. 66) is made with Japanese radish – not the common red radish found in Turkey. Ottoman-Style Lentil Soup (p. 68) is a fortifying soup with plenty of vegetables hidden in the puree. There is an interesting Ottoman soup, Chickpea Soup (p. 69) with a spice combination of cinnamon, cumin, and paprika that is often found in Persian cooking.

Another section covers the less well known, mostly Kurdish region of Southeastern Anatolia, with its stunning walled cities of Diyabakir and Mardin, and the more Arab city of Gaziantep. Although red lentil soup with mint or cumin is ubiquitous in Turkey – there are at least five lentil soup recipes in the book – here the Sour Red Lentil Soup with Eggplant (p. 295) is quite unusual and fortifying. It contains Swiss chard, eggplant, and both rice and lentils – a vegetarian’s complete meal. There are also unusual pilaf dishes like Green Wheat Pilaf, that is made from freekeh, a smoked green wheat often found in Syrian and Lebanese dishes. Kilis Kebab (p. 308), is a ground meat and eggplant kebab, served with a tomato-pomegranate sauce. It is the cover photo of beautiful skewers loaded with Japanese eggplant and flavorful meat.

The Turkish Cookbook will expand your ideas of Turkish cooking – and remind you just how inventive it can be.

Heat a skillet, add walnuts and dry roast over medium heat for 6 to 7 minutes, shaking the pan so the nutes do not burn. Remove from heat and let cool. Place the walnutes in a food processor and process to breadcrumb consistency. Add bread crumbs and process or pulse a few times. Add the red bell peppers garlic, salt to taste, pomegranate syrup, brown sugar and olive oil. Blend well until a rough paste is formed. Transfer paste to a bowl, cover and refrigerate until serving.