Ramin Ganeshram: Stir It Up!

Ramin Ganeshram‘s Stir It Up! (Scholastic 2011) is about a six-grade girl named Anjali whose father runs a roti shop in Queens, New York. Anjali comes from Trinidad, but is curious about new foods even Chinese.

Her dream is to travel the world as a Food Network star. She already goes to a culinary school, and then she enters a program called Super Chef Kids and is one of the finalists in a competition to win a Food Network show. To enter the competition Anjali has to submit a video of cooking a dish. Her best friend Linc is her film director and taster. Anjali is full of imagination, and even in her sleep one night before the competition, she dreams up recipes in her sleep! She is very smart and clever, but instead of taking an important sixth grade test, which her family wants her to take, she runs away to the Food Network Competition. 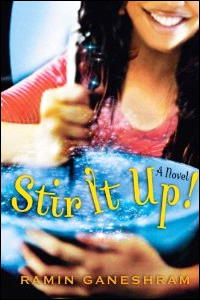 I really like theroti shop. People who eat there seem to love the food and you learn how a kitchen in a restaurant is run. Anjali works in the shop along with her grandmother Deema -– acting as both waitress and cook.

The idea of having the star of a cooking show be a kid – even an older kid – would really change food TV. Watching other kids is cool – it would be more fun to watch a kid cook then Paula Deen or Rachael Ray. Someone like Anjali would be the right kid – she is hard working, persistent, imaginative, and modest.

Throughout the book Ramin weaves recipes that Anjali or her grandmother Deema make.

One of my favorite recipes is Trini-Style Salmon Sushi Rolls (p. 114). I loved the Easy Curry Chicken (p. 48) because I love curry. The recipes encourage kids -– and adults -– because they are fun and they really sound like Anjali wrote them.

Stir It Up! would appeal to kids who already like to cook and try out new recipes – or to kids who go to fast food restaurant – maybe they’ll start cooking! On the back cover it says:

Warning: Please read on a Full Stomach. This book will make you hungry for delicious and well-prepared West Indian food!