Whoopie Pies: By the Book

I recently brought a tray of whoopie pies in to my daughter’s kindergarten class as a birthday treat. To my surprise, the immediate reactions came not from the kids but from parents and teachers. Oh, the memories they brought back!… 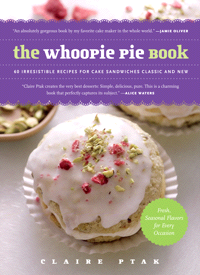 If you go by the book — that would be The Whoopie Pie Book (The Experiment 2011) by Claire Ptak, of course — you would understand. Whoopie pies “now have an international following, partly because everyone seems to be in search of a new cake to replace the ever-popular cupcake, but mostly because they are just so delicious.” Sixty recipes for whoopie pies and other cake sandwiches in Ptak’s book tend to reinforce this feeling.

I particularly like the classics, such as the original chocolate whoopie pie as well as mocha and pumpkin varieties. Then again, there are some irresistible ones like red velvet, lemon, and carrot. There are interesting twists, too, like recipes for gourmet-style whoopie pies with glazes and drizzles, as well as frozen and chilled pies.

I tried the pumpkin whoopie pies with cream cheese filling with Rachael Ray’s whoopie pie pan. The results looked bakery-perfect yet simple and quick enough for my second- and fourth-grade daughters to make. With another hectic school year around the corner, I plan to add homemade whoopie pies to my children’s lunch boxes.

Who knows? In the years to come, maybe my own children will find memories flooding over them when the see, smell, and taste whoopie pies.