Little kids like little treats. Cutie Pies (Andrews McMeel 2011) by Dani Cone is a wonderful introduction to pies – it isn’t aimed at children, and there are some sophisticated party recipes – but it does have some pretty little pies that will charm a child.

Dani owns Seattle’s High 5 Pie & Fuel Coffee shops. She’s a self-taught chef, with inspiration from her grandparents, who were both pie experts.

Everything comes down to this: Whatever you choose to do, take it on with purpose and do it well and with your heart. For what I lack in professional baking credentials, I try to make up for in each handmade pie, a proud example of what Grandma Molly taught me beyond the perfect crust: Be Good Do Well. (p. x) 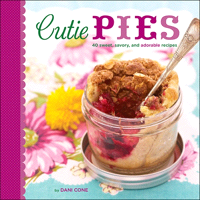 What is unusual is that she doesn’t make just one or two sizes of pies – she makes six different sizes:

The first chapter includes four different piecrusts, like butter, graham cracker, vegan, and gluten-free (p. 9) that includes a mixture of rice flour, amaranth flour, cornstarch and butter. The first pie is Pear-Cranberry Ginger Cutie Pie (p. 23) that sounds like the perfect end to Thanksgiving or a fall meal. There is a photograph by Thomas Gibson of this pretty pie on the cover of the book. There is also a savory recipe for Three –Cheese and Onion Cutie Pie (p. 30) flavored with cheddar, Swiss, and Parmesan cheeses and Garlic, Potato, and Chive Cutie Pie (p. 35) for a really cold day when all you want is mashed potatoes.

The Petit 5s are great for parties or even a sweet nibble after dinner. There is a Key Lime Petit 5s (p. 40) with a Graham Cracker Crust and a garnish of raspberries and an ever-so-cute Banana-Blueberry Pudding Petit 5s (p. 42).

The most interesting idea is the Pie Jars. They are single-servings in their own jar – wrapped up they would be a perfect gift this holiday filled with Spiced Plum Walnut (p. 64) or Raspberry Mint Chocolate (p. 66) with an elegant frown of raspberries. Many of the recipes in the book could be made as piejars. Get the kids in the kitchen and make a batch for them, and one to give away.