More than 500 participants came from all over France, Scotland, England, Germany, and the French Antilles. All came to win praise for their boudin noir. Boudin noir are sausages made with fresh pig’s blood, onions, and spices. The casing are always natural. They come in different sizes for eating raw or cooked. They are traditionally served sauteed with potatoes and apples. But they can also be eaten cold with an aperitif.

The huge exposition hall held nearly 20 large tables, each with plates piled high with boudin noir of all shapes and sizes. A number lay by each plate so that the name of the charcutier remained secret. 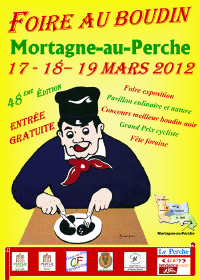 I joined one of the tables as a judge. There were three judges per table – one a charcutier, another a boudin specialist, the third a member of the public – someone who liked boudin. (I was in the third group.)

Andre-Marie, a local charcutier from Le Perche, gave us a lesson on how to judge boudin noir:

He handed me the judging form: it included several categories: the look of the boudin noir, the casing, the blood inside, the fat, and finally, the taste. Each category was marked from 1 to 10 – 10 being the best. After we finished, we added the numbers up for each boudin.

German boudin were elongated like a football and much larger than the French boudin. The best French were thinner, like a German bratwurst or an Italian sausage.

After tasting four boudins, I started to get the knack of it and felt that when I gave my opinion, I had judged fairly. However, after tasting 10 boudins, I had my fill and decided to take a break from boudin noir for a while. But, no, at noon, everyone stopped for lunch – more boudin as well as pates, salads, and plenty of local hard cidre.

We went bak to work until 5:30 P.M. I had had enough. Finally, the public, who had lined up outside Le Carre du Perche hours earler, could enter the hall and join us in tasting the boudin.

In the late afternoon, the judges, led by Jean-Claude Gotteri, Grand Master of la Confrérie des Chevaliers du Goûte-Boudin, in his fancy green, white, and gold costume, announced the winner. A charcutier from the town of Bretoncelle in Le Perche won the gold medal for a delicate, light boudin that was mildly spiced. The silver went to a German butcher from Berlin for his slightly heavier but spicier boudin. He was dancing with joy: Mortagne is the greatest of boudin honors!

Free to go home I packed a few boudins – some from Germany, some from the local “King of Boudin” charcuterie in Mortagne, invited friends to share the bounty and drink more hard cider.