The success of Harry’s Bar in Venice, founded by Giuseppe Cipriani in 1931, depends on hospitality and invention. Both are contained in Simply Italian: Classic Recipes and Tips from Harry’s Bar in Venice (Assouline 2013) presented by Arrigo Cipriani, son of the founder. His smiling face (he and his son control a small empire of Harry’s Bars and Cipriani establishments) decorates a sturdy golden box that holds the flipbook. Take it out of the box and stand it up on its side. Flip through the pages of luscious photographs as if you were looking at family portraits like The Bellini, the magical white peach juice and Prosecco cocktail that was invented by Giuseppe. Mix one up and you’ll be ready to tackle this book of Italian classics. 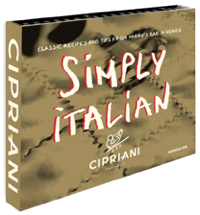 The book is laid out quite logically, moving from Antipasti through all the different pastas (getting separate chapters) and onto fish, meats, vegetables and desserts. It is easy to imagine Evelyn Waugh’s Charles Ryder and Sebastian Flyte tucking into a plate of Veal Cannelloni with Bolognese or Piedmontese Sauce (p. 74) after a martini or two at the bar. Or think of Orson Welles eating Langoustine Thermidor Cipriani (p. 105) while contemplating a young starlet? While Ernest Hemingway eats Veal Chop Milanese (p. 135), steeling himself for another round of Harry’s Bar’s famous Bellinis. As for invention, it did not stop at alcohol, but includes beef Carpaccio (p. 150 and Carpaccio Sauce (p. 166) with a base of mayonnaise and Worcestershire sauce.

If you didn’t get to Venice this year (or New York for that matter) you can still indulge in an evening at Harry’s Bar. Dress up in your favorites from the last century and toast with a Bellini and cook with Simply Italian.