Worn Stories (Princeton Architecture Press 2014) by Emily Spivack is just the kind of holiday present that puts abundance of gifts into perspective – in a very good way.

These are “sartorial memoirs” from a large group of very interesting people – who include two chefs, April Bloomfield and Marcus Samuelsson. Each memoir with an accompanying photograph is about a garment – sneakers in the case of both April and Marcus – and what they mean. 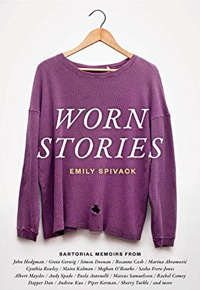 Rather than writing about the stories, Super Chef has a treat for readers: Marcus’s story is excerpted here:

My mother and grandmother made most of my clothes when I was growing up. I’d ask for Levi’s and my grandmother would say, “You want a pair of jeans? We can make that.”

If you’re American, it’s hard to understand how aspirational America was for people like me, growing up in Ethiopia and then Sweden, particularly around brands like Converse, Levi’s, Vans, and MTV. Especially when you’re a thirteen-year-old kid wearing almost-Levi’s that your mom made you with a raggedy Levi’s tag sewn onto the pocket that she cut from somewhere else, along with brightly patterned hand-me-downs that were once worn by your sisters.

But the thing my mother and grandmother couldn’t make was sneakers, and that made me want them even more.

By the time I got a scholarship to go to culinary school in Switzerland, I’d finally gotten my hands on a pair of Converse. Every day began with a daily lineup of all the chefs, and while most students wore Birkenstocks or Dr. Martens, I had on my slightly feminine turquoise ” target=”_blank”>Chuck Taylors. I wasn’t supposed to wear them in the kitchen- nobody could enter the kitchen with sneakers- but if I was feeling rebellious, I wore my Converse. As a cook, you’re taught that you aren’t supposed to be seen, but that was impossible for me because as the only young black cook, I was seen the moment anyone entered the kitchen. So what did it matter if l wore Converse? The shoes were part of finding my identity as a person and as a chef.

Today I still wear my Converse, especially because of how versatile they are. I wear them in the kitchen when talking to the dishwasher, when I sit down for a meeting with my partners, and in the dining room of Red Rooster when it’s showtime and I’m greeting the Knicks or Salman Rushdie or whoever comes through the restaurant that evening. When I get up in the morning, think about the day ahead of me, and know that I’m going to be on my feet constantly until I get home at midnight, no matter what else I’m wearing I want my Converse. I remember seeing this iconic picture of Mick Jagger mixing it up with his three-piece suit and pair of Converse and thinking, “That’s how to own it.”

– AS TOLD TO EMILY SPIVACK

Just a pair of Converse – and yet, they represent much, much more. Pick up Worn Stories and read the rest.