What does it mean to be a New Yorker to you?

To some, it means knowing where to get the best pastrami, egg cream, or bagel or pretty much anything else edible.

To others, it means knowing the outer boroughs as well as Manhattan.

Everyone who is a New Yorker claims to know about New York and share something that makes them uniquely different from all other Americans. 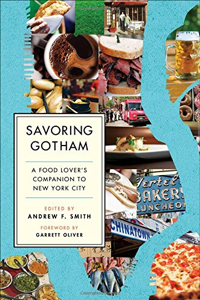 Maybe that something is contained in Savoring Gotham: A Food Lover’s Companion to New York City (Oxford 2015). Edited by Andrew F. Smith, it’s a guide to the history, the people, and the places that make New York a food town.

Ever wonder about Schrafft’s, where ladies used to dine on crustless sandwiches and little girls would be treated to chocolate fudge sundaes by their grandmothers after skating in Central Park? The history of Schrafft’s is on pp. 525-6 along with a photograph from 1929 of Schrafft’s candy-filled window display.

What ever happened to Lüchow’s, New York’s preeminent German restaurant on Union Square? Read up on founder August Guido Lüchow on pp. 354. It gives you a sense of the fluidity of the city. Neighborhoods change from seedy to fancy and back again over the decades. Read about the Fulton Fish Market (pp. 230-2) or Barry Benepe’sleardership of the greenmarket movement that has spread across the country (pp. 246-8). None of the essays are long, but most include a bibliography to find out more. Savoring Gotham isn’t exhaustive – food writers like Gael Greene and Mimi Sheraton are mention, but plenty of missing – like Sam Sifton and Colette Rossant. Still, this is a great resource to brush up and fill in your knowledge of culinary New York – both old and new.

If you are going to call yourself a New Yorker, you might want to know practically everything in this book.