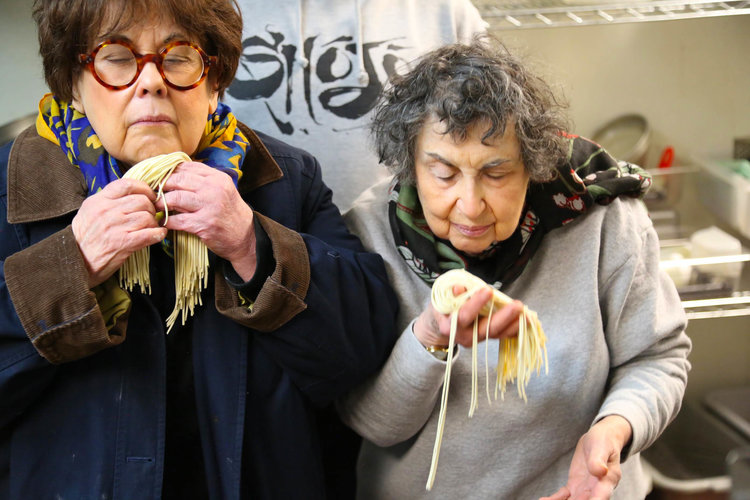 Ever get lucky enough to be invited into a kitchen to learn how to make a dish you just can’t stop thinking about? You sweet talk the chef, you frantically memorize what he is doing, and rush home to write it all down.

It’s also the idea behind the Brass Sisters‘ new PBS series, The FoodFlirts, debuting on Friday, July 28, 2017, at 10PM and 10:30PM ET. Super Chef favorites, the Brass Sisters are the charming, sassy, and often funny culinary duo behind a series of cookbooks and TV shows.

“We love to flirt, but we are harmless!” says Marilynn.

“Speak for yourself,” responds Sheila.

What mischief will they get up to with that come on?

It turns out there is plenty of flirting going on.

They start with a bucket list of food they’ve always wanted to try, things like pastrami and ramen. Not only try, but also recreate in mash ups in their home kitchen after learning how to make and enjoy the traditional dishes in local Boston eateries.

In the preview Super Chef viewed, Sheila and Marilynn are lead by producer Bruce Seidel, a former Food Network and Cooking Channel executive, head to Mamaleh’s to watch and help a Chef Tyler Sundet prepare pastrami. They get their hands dirty smearing a peppery, thick marinade on slabs of meat.

Then they head to China Town for a class on Ramen broth with Chef MarkO’Leary and noodles with Brian Moy, owner of Shojo. They end up properly slurping up a bowl of noodles and broth with aplomb. They ask just enough questions and get involved with the actual mixing and making enough to show how we would feel in their stead.

Boston-area fans will already know about the Brass Sisters, now it is time for
the rest of the country to tune in and enjoy their shtick.