Rachael Ray: ‘Make Your Own Take Out’ Recipe Cards

You remember them, don’t you? Those hard-copy pieces of 3″ x 5″ paper? Your mother, your grandmother, and your great-grandmother used to keep recipes on them? You may have some hand-me-downs stashed away at home still, in some metal box in the corner of the kitchen.

In short, nothing new here — except for a TV cook and personality’s efforts to milk her public for every nickel they have, drawing on nostalgia for Mom, Grandma, and Great-Grandma. 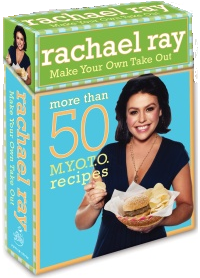 Rach’s Make Your Own Take Out (or “MYOTO” in Rach-Speech) recipe cards come in a package that makes them look like a deck of playing cards. The package includes “More than 50 MYOTO recipes” (Random House 2009). The cards contain photos with vivid colors. They hold the kind of recipes a college kid might want to make in a dorm kitchen; easy, homey, even full of flavor — commercial.

The recipes come divided by cuisine: Thai, Chinese, Indian, Mexican, and so on. It just like ordering take-out! If you choose Thai, you can make Thai Chicken Noodle Soup, followed by Thai Shrimp Curry with Chopped Lettuce and Basil-Lime Couscous. Or you could switch and have a main course from another cuisine like Tex-Mex and try Chipotle Chicken Rolls with Avocado Dipping Sauce. Who would-a thunk?

The cards aren’t waterproof, but they are fairly sturdy, so they can go from box to supermarket to kitchen counter. There aren’t any dessert recipes, so don’t forget the ice cream, fudge sauce, and whip cream for afters.

Still, Rach’s recipe cards lack something… Where are the smudge marks from long-ago days and nights of cooking? Where is the hard- to-read handwriting from aging aunts? Sorry, but Mama’s recipes are better — the food that helped make the family.

Thanks, Rach! You can keep your MYOTO cards: time to dig up grandma’s old recipe card box!

One comment on “Rachael Ray: ‘Make Your Own Take Out’ Recipe Cards”