Jacob & Jacob: What the Great Ate

Journalists — and brothers — Matthew and Mark Jacob must have had a blast writing What the Great Ate: A Curious History of Food & Fame (Three Rivers 2010).

This book surveys everything culinary that famous people have said or done. If you like books of great quotations –- or even Flip Wilson’s standup on great quotations — this book is full of gems you’ll enjoy.

However, this is no mere collection of food tales:

It is supposed to entertain, but it’s not mere trivia. Eating is a primary instinct. How did it influence the higher accomplishments, such as writing, composing, and theorizing? What food-related obsessions guided humankind’s development? And what is the fuel for genius? (p. ix)

The chapter on writers, “Eating Their Words,” starts with a passage about how Ernest Hemingway’s father made him eat a porcupine when he was thirteen years old after he had killed it because it had injured a dog. (p. 31) The subsequent passage relates to how Sinclair Lewis tried to curb his alcohol intake by concocting a recipe for chocolate cookies that called for a shot of bourbon (p. 32). 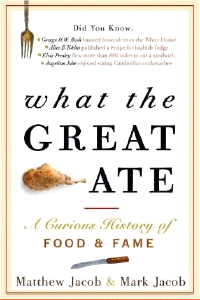 The book’s index is useful for looking up the names of the famous and infamous, but it does not list ingredients or dishes by name.

There is a fun chapter on the presidents. The Jacobs write that Thomas Jefferson may have been America’s first foodie. Though they mention that his presidential dinners “set new standards for culinary excellence” (p. 111), unfortunately, they do not record what was eaten at any of those dinner. They do mention that Jefferson smuggled two sacks of Piedmont rice back to America – a crime punishable by death. Luckily, the crime was not uncovered, but too bad the South Carolina farmers did not start growing this great rice.

Tuck What the Great Ate into your dining room bookshelf next to your encyclopedias and dictionaries, and you’ll find plenty of reasons to take it down and explore it.

2 comments on “Jacob & Jacob: What the Great Ate”