Can a book make you rethink what you eat?

Plenty of vegetarians and vegan would say yes in the case of books about the meat industry.

But what about changing how we think about sugar?

Plenty of diet books would like to influence us, but Marc Aronson and Marina Budhos‘ Sugar Changed the World A story of Magic, Spice, Slavery, Freedom, and Science (Clarion 2010) aims to do more. It is a book for young adults about the history of sugar and how it intersected – created, sustained, and deepened – the cruelties of slavery, and led to revolution – French, American, and Haitian.

It is a complex book, and yet the authors succeed in drawing their conclusions clearly. Richly illustrated throughout with photographs, etchings, drawings, maps, and timelines that bring the story into the modern age. This is brutal history about how colonization, imperialism, and economic demand changed history.

Yet it is also the story of food – the extravagant amounts Europeans paid for sugar before the plantations in the West Indies and South America flooded the market:

Since sugar had to pass through many hands before it reached the fairs, it was expensive and hard to get. King Henry III of England, for example, liked sugar. Yet there was little he could do to satisfy his craving. He wrote to one official in 1226 asking if he could possibly obtain three pounds of the precious substance – at a cost of about 450 modern dollars. (p. 24) 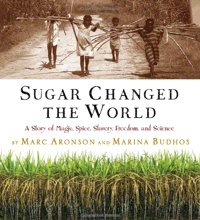 Once sugar becomes a cheap commodity that is paired with tea and chocolate in Europe, it becomes a major source of food for the working classes.

Starting around 1800 sugar became the staple food that allowed the English factories – the most advanced economies in the world – to run. Sugar supplied the energy, the hint of nutrition, the sweet taste to go with the warmth of tea that even the poorest factory worker could look forward to. Sugar was a necessity. (p. 68)

The authors bring a passion to the story that comes from their own family histories – and their stories open and close the story of sugar. One of Marc’s relatives helped create sugar from beets, and Marina’s family were part of the wave of Indians brought to Guyana to replace slaves after slavery was abolished.

Sugar Changed the World is a fast-paced, exciting read about the terrible cost of sugar. There are passages about rape, torture and cruelty towards slaves, so it is appropriate for an older child – or an adult.

One comment on “Aronson & Budhos: Sugar Changed the World”