It is hard to resist a great book cover – especially if it reminds you of a Lady Gaga dress.

Marissa Guggiana‘s Primal Cuts: Cooking with America’s Best Butchers (Welcome 2010) announces itself with a butcher paper wrapped book that has a photograph of raw beef peeking through. Yum.

This is the real stuff: no shrink-wrap, no Styrofoam, and no pad underneath to catch the blood. Primal Cuts is a book of portraits of working butchers, chefs, and nose-to-tail artisans, who are serious about their meat. 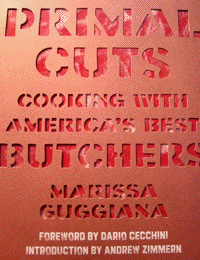 The book is alphabetical by the butcher’s last name – starting with Josh Applestone of Fleisher’s Grass-Fed & Organic Meats. The profile starts with an overview of the economics of butcher shops – its about pennies and covers Josh’s veganism (he gave it up) and his mantra of selling only whole animals. His recipes, Horseradish-Crusted Roast Beef (p. 18) and Stir-Fried Liver (p. 19) are simple – just flavors that showcase his grass fed beef and any kind of liver (chicken, duck, goose, or calf) with curry and onions. Josh (his wife Jessica for some reason isn’t pictured) is shown in the photo without meat – only the tools of the trade hanging on the wall behind him.

The next profile is of a chef, Pete Balistreri of Tender Greens, who runs a chain of four restaurants that offer $10 meals.

Pulling down something that’s ready is like opening a birthday present. I don’t really have anyone to talk to that makes salami, so I just experiment. I wish I could fill up this whole place with salumi. I’d be like a mad scientist. I’d be in my glory. (p. 22)

There is a photo of Pete sniffing a freshly cut salami. Neither of his two recipes are for salami – The author includes one from her own family in the middle of the book in an essay on dry curing. There are other essays sprinkled throughout the book, like a useful one on Sausage Basics (pp. 32-33) and another on How to Cut a Culotte Steak on p. 165, and also Primal Cuts on each animal, like a fascinating one on Venison (p. 178-9).

Though this is a book filled predominantly with male butchers, there are female examples including: Tia Harrison of Avedano‘s, Marsha McBride of Café Rouge, and Erika Nakamura and Amerlia Posada of Lindy and Grundy’s.

Primal Cuts is a good read for the stories behind the careers of the butchers and chefs. Marissa celebrates the human stories as much as the good food they sell.