Christopher Robbins: Apples are from Kazakhstan

Christopher Robbins weaves marvelous stories into Apples Are From Kazakhstan (Atlas & Co 2011). Part scientific journey, part history, and part travelogue, the story starts with the origin of apples and follows him as he illuminates life on the Central Asian steppe. If you have any interest in learning about the people, the history, or the food of Kazakhstan, Apples are from Kazakhstan is the best place to start your trip.

His first guide is a Ukrainian–born botanist, Anna Ivashenko, who takes him to find wild apples in the foothills of the Tien Shen, or Heavenly Mountains outside the former capital of Kazakhstan, Almaty (which means “father of apples”):

Anna shook fruit from trees, picked wild flowers – she held in her left hand a slowly expanding bouquet – and crushed leaves for me to smell. She rooted around the undergrowth like a wild boar: in the space of a hundred yards she found wild mint, blue chicory flowers, a wild carrot, tarragon, ginseng that looked like a blue tulip, thistles of deep imperial purple, oregano, wild raspberries, half a dozen species of chives, and a root from which she said chewing gum was made. (p. 18) 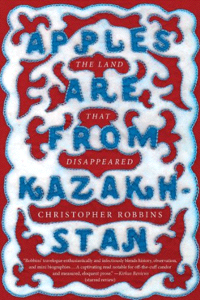 The city of Almaty and the surrounding area used to be the center of a rich apple industry of giant Aport apples and calvados, and like the Hudson Valley in New York, has fallen on tough times. Christopher tells the story of Nikolai Vavilov, who figured out the details of the apple’s origins and then fell into a Stalinist trap like so many others in the former Soviet Union.

He describes the Green Market in Almaty with its horse butchers and fish mongers selling to the hundred or so nationalities that ended up populating Kazakhstan – many exiled there under Stalin.

I first visited the market in summer, but I was later impressed to see the outdoor stalls open for business even in midwinter, when old Kazakh women bundled in cardigans and hats sit in the snow, their wares skimpily covered in polythene, as indifferent to the cold as statues. (p. 54)

The same older citizens of the Former Soviet Union can be seen outside train stations and other markets, braving the cold, hoping to earn a bit of money.

The book goes on to unfold the story and history of Kazakhstan and its people with sensitive drawings and illustrations by Bob Gale. The writing is rich and vivid – and full of moments that will make you want to plan your next trip – to taste wild carrot or to try your hand at hunting with golden eagles.