Ever see a kid pick up a book and decide to read it? It is the title and the cover art that grabs them.

You won’t hesitate picking up Silvena Rowe‘s Purple Citrus & Sweet Perfume: Cuisine of the Eastern Mediterranean (Ecco 2011). The title suggests so much – sour and sweet scents, deep colors and intoxicating smells – and the cover photo by Jonathan Lovekin of Chilled Sweet Pea and Watercress Soup with Rose Petal Cream (p. 96) draws you in. Silvena is a Bulgaria-born chef – and that’s her entre into the world of the old Ottoman Empire:

It would be impossible to cover every cuisine deriving fro the Ottoman Empire, so I have stuck, with the odd sidetrack, to the eastern end of the Mediterranean. Here you will find a modern twist on the classic recipes of this rich culinary tradition, following in the footsteps of the great Ottoman chefs who combined the sweet and the sour, the fresh and the dried, honey and cinnamon, saffron and sumac, scented rose and orange flower waters with the most magical of spices. This book is proof, if proof were needed, that there is a lot more to the Mediterranean than just Italy and France. (p. 11)

Silvena takes familiar and not-so-familiar recipes and brings out lighter flavors. The photographs of Ottoman houses, the painted ceiling of a mosque, minarets towering over a modern town are paired with vibrant pictures of dishes – color splashed on plates so intense that it seems each was made from ingredients at the height of ripeness. 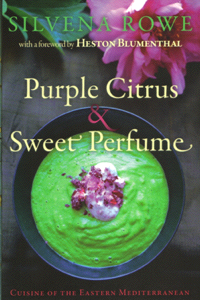 Judge a Turkish or Syrian cook by the mezze they make. Silvena starts with Suzme Rolled in Za’atar, Sumac and Pistachios (p. 22), a simple dish of goat cheese combined with drained yogurt rolled in her two favorite things – tart sumac and za’atar, the thyme and sesame seed mixture (p. 249). More unusual are the Stuffed Vine Leaves with Winter Squash, Rice and Pine Nuts (p. 27) served with a yogurt lemon sauce or Veal, Sour Cherry and Almond Stuffed Vine Leaves (p. 55). She plays with other traditional dishes, replacing chickpeas in Jerusalem Artichoke Hummus Topped with Lamb and Sumac (p. 37) that is similar to Hunkar Begendi, the Turkish dish of lamb over creamy eggplant. These are inventive dishes – with plenty of vegetables playing off the meat or without as in Fennel and Feta Kofte with Walnut Tarator (p. 57). It would be easy to make a meal of three to five of these lovely dishes with a salad.

The book starts off with an enthusiastic foreword by Heston Blumenthal (p. 7):

The pages are packed with Silvena’s characteristic enthusiasm and irresistible passion, I defy anyone to resist

Why would anyone resist?

To cook the lamb
Place the lamb on a baking sheet, sprinkle with half the sumac and season. Rub with olive oil. Roast for 25-30 minutes, depending on how pink youlike your lamb. Remove from the oven and allow to rest for 10 minutes.

To make the hummus
Place the Jerusalem artichokes in a saucepan and cover with cold water. Bring to the boil. Cook over medium heat for 1-15 minutes until soft. Drain and cool.

Puree the artichokes in a food processor. Add the lemon juice, cumin seeds, tahini, and garlic. Pulsing the machine gradually drizzle in the oil, and season.

To serve
Thinly slice the lamb. Spoon the hummus into a serving dish and arrange the lamb slices on top. Sprinkle with the remaining sumac.