Lily Vanilli in A Zombie Ate My Cupcake

Author and baker Lily Jones tells the tale in the beginning about setting up a stall at Swanfield in East London and then getting caught up in the cupcake craze.

As a reaction to this I started to make cakes that were the opposite: that looked grotesque but were delicious–insects and worms and human body part, a whole series of roadkill cakes based on actual findings, and hundreds of edible beetles. (p. 7 ) 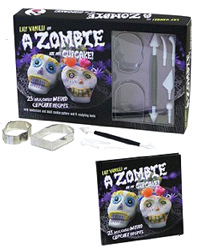 The recipes won’t disappoint you or your kids – they are irreverent and gross – and totally funny. Try Sweeney Todd‘s Surprise (p. 20 ) that is a cupcake resembling a potpie with a finger sticking out of it. Or you can make Morbid Meringue Bones (p. 32 ) – that are dripping with blood. You’ll find the beetles in Marzipan Beetles (p. 39 ) crawling on chocolate cake.

This is a mini book, so the print is correspondingly very small.

It comes with plastic tools, and two cutters, perfect for making Day of the Dead Skulls (p. 8 ), but you will need to get other tools depending on the recipe.

The kit makes a great gift for a Halloween fanatic.

One comment on “Lily Vanilli in A Zombie Ate My Cupcake”