A sexy Sandra Lee may be gracing the pages of Harper’s Bazaar the month, and five female chefs may have made the list in Maxim (Eden Grinshpan, Aida Mollenkamp, Giada DeLaurentiis, Padma Lakshmi, Paula Deen).

Still, no one comes close to Nadia G..

Check out the cover of her new cookbook, Nadia Giosia‘s Cookin’ For Trouble (Balentine 2012) in which the decidedly vampy Cooking Channel Star of Nadia G’s Bitchin’ Kitchen, is dressed in a pasta dress in front of a wall of tomatoes, beckoning the reader. 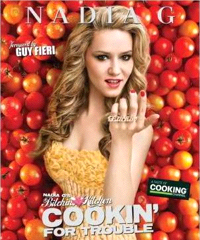 This is a tongue-in-cheek, fork-in-food, and who-knows-what-else kind of cookbook.

When I first met my paisan Nadia G and watcher her show, Bitchin’ Kitchen, I saw a kindred spirit. She’s totally out of bounds and follows her own rules. I read her first book cover to cover and couldn’t believe what she was pullin’ off!

Her show is a “crazy comedy-cooking show” and that means mostly easy-to-prepare dishes from around the world.

In the first chapter called (dysfunctional family pizza night, you get Nadia in a leopard-print skin-tight dress, eating pizza surrounded by family photos. She writes about her family – this is comedy, right? – including her mother, “This lady doesn’t plan for retirement, she plans for losing her job due to a crippling illness caused by a third World War, and ‘Oh no what’s Nadia gonna eat?'” (p. 3) Nadia includes Zia Mimi’s Pizza Dough (p. 5), Pizza Con Le Patate (p. 7), and All Dressed G-Style Pizza (p. 9) with olives, spinach, and Genoa salami.

Chapter 5 covers Turkey Time – there is an amazing picture of Nadia (?) in a pheasant mask and dress coming out of a gate in the dark. Recipes range from da Bird (p. 63) with properly gnawed drumstick bones to Pancetta Chestnut Stuffing (p. 65) with more bones – these with a bit of meat left on them. Finally, Turkey Matzoh Ball Soup (p. 69) with yet more bones and bits of meat.

There is nothing like Chapter 10 – Depression Desserts: Nadia in a blue crinoline dress draped over a tea table set with blue cupcakes and a spilled vase of blue flowers. There are recipes like Inverted Lemon Meringue Pie (When Life hands you lemons make lemon custard) or Rebecca’s Psycho PMS Chocolate Balls (p. 119).

There is a cast of characters in various stages of undress, wacky pictures of pigs, and an Italian Slang Dictionary. Got a friend who is a fan – this is the book for them.