What is the equivalent of a beach novel in the winter? A comfy, romantic page-turner, that keeps you going and satisfies you in the end?

Robert Barclay‘s More Than Words Can Say (William Morrow 2011) fits the bill. Take it on a mid-winter cruise, or read it on a cold night. It’s a story centered on food, romance, family, and memory. 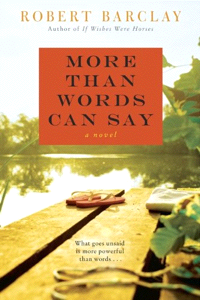 A beloved grandmother wills her granddaughter a summerhouse on a lake, a book of recipes, and secrets. Uncovering those secrets – living them out herself like her grandmother’s doppelganger, she finds happiness and a new life. The recipes are from WWII – by the author, but purportedly by the grandmother:

She very much enjoyed creating her own dishes and obsessively tinkering with each one until it was just right. As the war became an increasing part of her life, she had seized on the idea of naming her delicacies after Allied war leaders and American movie stars who were well-known for aiding the cause. (p. 67)

So we get Clark Gable‘s Grapefruit Cake, Eisenhower‘s Eggs Benedict, Churchill‘s Cherry and Cream Cheese Pie and so on. They are cooked and eaten by the characters in the book – and they are included in a little recipe

More Than Words Can Say is sentimental and old-fashioned – so read this one if you like your beach/winter novels that way.