Brian Yarvin: The Ploughman’s Lunch and The Miser’s Feast

Read the recipe titles in Brian Yarvin‘s The Ploughman’s Lunch and the Miser’s Feast (Harvard Common Press 2012) and marvel at the wealth of British English culinary terms. From a chapter called On the Side: Clapshot (p. 125) is a mash of turnips and potatoes, Pan Haggerty (p. 126) is a dish of baked sliced potato, onion, and cheese, and the more familiar Welsh Rarebit (p. 133) is a cheese sauce for toast. Lyrical names for warming, comfort food – perfect for the winter months. Brian takes us on a tour of good, solid British food, and finds much to love in the pastries and pasties, the curries, the pub fare, and the Sunday roasts. He features his own photographs of food, but also country lanes, signs, and handsome buildings.

In a chapter on Savory Pies and Baked Goods, he delights in what pie shops have on offer. The first recipe is for British Hot-Water Crust (p. 137) includes milk, beef suet, lard or shortening, and hot water – everything is hot. Use the dough for Chicken, Ham, and Mushroom Pie (p. 139), Cockney-Style Minced Meat Pie (p. 142) that needs Liquor: Parsley Gravy (p. 143) gravy made from chicken broth, malt vinegar and parsley. “Remember, thought, to warm a cockney heart, keep the seasoning at a minimum, and serve them with mashed potatoes.” (p. 142) If you haven’t got a Cockney heart, well, definitely increase the seasoning. Brian includes a recipe for proper Steak and Kidney Pie (p. 149) using the same dough, and Traditional Cornish Steak Pasty (p. 156) full of beef, potato, onion, and turnip. 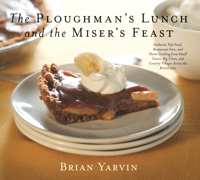 On the sweet side, there are recipes for Fat Rascals (p.171) a kind of spicy current cookie, Flapjacks (p. 172) that are not American pancakes, but a kind of granola bar served for tea, full of nuts, oats, and raisins. Try Kentish Huffkins: Yeast-Raised Sweet Bread (p. 183) – again the name alone is intriguing – Brian doesn’t have any insight into where it came from – but you can imagine hobbits liking this cake for elevensies. At the back of the book, you’ll find a two-page glossary of British-American terms, with important translations like cornflour for cornstarch.

Children will enjoy Brian’s tour of the UK, the amazing food and recipe titles, and the straightforward recipes. Adults who have visited the British Isles will enjoy this nostalgic cookbook.

1. Preheat the oven to 325˚F. Mix together the flour, baking powder, brown sugar, currants, cinnamon, salt, and cloves in a large bowl.
2. Combine the flour mixture with the lard, using your gingers to pinch the ingredients together until a dough begins to form. Add the milk, 1 tablespoon at a time, until the dough has the consistency of modeling clay.
3. Sprinkle your work surface with some additional flour and roll the dough out into a sheet 1/2 inch thick. (Yes, these are fat cookies.) Then use a 2-or 3-inch round cookie cutter to cut out disks.
4. Grease a baking sheet with butter, lard, or shortening. Place the cookies 2-inches apart on the baking sheet and bake them until they are golden brown, about 25 minutes. Sprinkle them with granulated sugar and return them to the oven for 5 minutes more. Remove from the oven, let cool, and serve.

One comment on “Brian Yarvin: The Ploughman’s Lunch and The Miser’s Feast”