What he does at the restaurant to create technically challenging dishes of intense flavor – is exactly what he tries to achieve at home.

For some time, I’ve wanted to write a book that has both exciting recipes and all the background information that explains how they actually work. A book that makes people feel really at home in the kitchen. (p. 7)

That is, his kind of kitchen, that doesn’t skimp on great ingredients or tools. He believes that once you understand the implications and reason behind the steps or ingredients in a recipe, you can actually start to experiment and “let rip in the kitchen.” For that reason, this is as much a book for a student of cookery – as it is for an accomplished cook. However, the recipes often have many components and different cooking methods, suggesting that it might be better to have a cooking staff to help prepare a meal from Heston’s recipes. 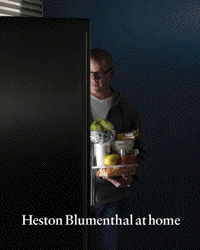 It starts with a long essay called “The essence of flavor”, that asks the simple question: “What is the difference between taste and flavour?” It is a clear review of the science behind taste. He follows this with lengthy recipes on stock. White chicken stock (p. 38) is made in stages – first the wings are brought to a boil, then drained and returned to a pressure cooker and cooked in three stages in which different ingredients, vegetables, flavorings, and finally pepper corns and herbs are added. The recipes are all in grams and kilograms, so best to have on hand a good kitchen scale.

The next section covers soups, including Leak and Potato (p. 56) and Red Cabbage Gazpacho (p. 63) that is a vivid purple – it is ladled into a bowl holding mustard ice cream (p. 288). First he goes over soups in general, and then, more specifically Thickening soups, Finishing soups and Consommes. He teaches you how to use an egg white “raft” to remove fat and impurities from vegetable stocks. The Mushroom Soup (p. 58) calls for making mushroom powder out of dried shitake and porcini mushrooms. This is finely ground dried and roasted mushrooms sprinkled on the finished soup. A Pumpkin Soup (p. 61) is a complex study in pumpkin-ness with both roasted and sautéed pumpkin, pumpkin seeds, red pepper oil and hazelnuts add to accentuate the flavor. The bowls are crusted with the nuts and rosemary and the smooth soup is ladled in.

Clarity is at the forefront of this book. The pages are well laid out by Graphic Thought Facility. The typeface is easy to read. The photographs by Angela Moore of Heston in his white kitchen or dishes and food being prepared capture the motion of cooking – Szechuan broth poured over duck dumplings or glistening slices of Konbu-cured halibut on a white plate – are beautiful. The colors and forms seem to reflect the thought behind each dish.

Although some of the recipes in Heston Blumenthal at Home are simple to prepare – especially his snacks – most are not. This is a rich, deeply thoughtful book – complex with purpose. No recipe is pointlessly complex. It is a book to be read carefully.