Writing a novel is tough. Finishing one and getting it published is a heroic feat. Combining that with being a full-time chef is hard to imagine.

And yet, Chef R. Christopher Christie, author of The Broken Path (OFS Production 2012), has done just that. He is executive chef of the Marina Bay Sands in Singapore – a huge undertaking by itself. (He oversees a team of 400, is responsible for 43 individual kitchens – serving an average of 15,000 meals per day.) And he’s somehow found time to turn out a great summer read – romance plus food plus restaurant business page-turner.

If you are a chef (and if you are not) and you are thinking of giving novel writing a try ¬– first read and enjoy the romance, great food, and career insights in The Broken Path. 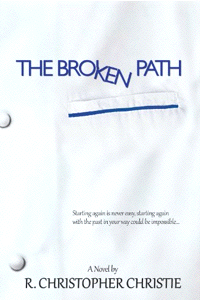 The story follows Richard Stratton, a ruggedly handsome and gifted chef, as he makes his way from Canada to France, opening up a Michelin starred restaurant, marrying a glamorous actress, and then giving it all up to return to Ottawa to open his own restaurant on his own turf. It turns out that his one true love, Nikki, also lives in Ottawa, only problem is that she is married to someone else. They are thrown together – and memories of her flood the book:

He could feel her touch, the softness of her skin on his cheek, her lips and her kiss. That slow, gentle kiss had been etched in his mind from the first time he felt it. Standing together at the edge of The Broken Path between two oak trees, he reached for her. (p. 37)

The broken path is in the forest of Gananoque where both of them (and her future husband) spent the summer. It is a path that isn’t broken – if you step over a fallen tree – or whatever else blocks your path in life.

Christie is especially good at describing how a restaurant opens. Christie describes the workings of a restaurant, the different positions of chef, sous chef and so on.

With the opening menu for Le Marche long completed and his mise en place ready, today was the first day of training the chefs on the recipes and plate presentations. Up to this point, the training had been on basic stocks, sauces and dressing: the core of the mise en place, a kind of condensed apprenticeship…(p. 53)

He writes about the choices Richard makes in the interior design, lighting, costs of redoing the exhaust system – his thinking about what would make his restaurant stand out. These insights into a chef’s thinking are really fascinating – and yet there is so much more, including an evil restaurant reviewer, family intrigue, and plenty of romance.

Expect to see more of Chef Christie. He’s already being featured on the Bio Channel in Asia in an 8-part behind-the-scenes documentary called Maria Bay Sands 24/7. Super Chef is predicting that some smart producer will be optioning the film rights to The Broken Path.

Here is a clip from the series: