It’s hard to imagine a trip to Lebanon without thinking of the great meals shared with Lebanese friends. Its cuisine is that against which all other regional cuisines are measured. This cuisine has borrowed and enhanced from the Middle Eastern repertoire – adding French, Ottoman, and Arab flavors as empire after empire occupied this rich sliver of land. Such complexity and sophistication mirrors the society of this Paris on the Mediterranean. A tiny country where the drama of the geography — scarcely an hour between skiing in the mountains and sunbathing on the sand — is matched by the drama of its history — and events to this very day. 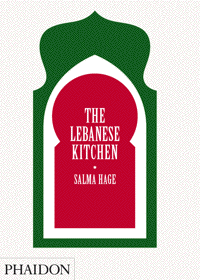 Salma Hage‘s The Lebanese Kitchen (Phaidon 2012) is a prodigious, thick volume of 500 recipes. She is a Maronite from Mazraat Et Toufah, a village in the mountains, who moved to England where she worked as a cook and chef, so this is her view of Lebanese cuisine – one with variation upon variation.

Super Chef decided to look for recipes that could be added to an American Thanksgiving to remind us of the how precious life is – when the civil war in Syria is spilling over the border to Lebanon – we can keep them in our thoughts by sharing their cuisine.

Turn to the Mezze section at the front of the book to get an idea of how rich The Lebanese Kitchen is – for a simple dish of Humus, there are seven variations – including Hummus with Pumpkin and Cilantro (p. 38) that would be perfect for a vegetarian hors d’oeurve. Another great choice would be Winter Tabbouli (p.57) with fennel, celeriac, parsley and mint. For something fancier, there is Mini Flatbreads Topped with Crab, Salmon and Tahini Sauce (p. 75) and the rather incredible Stuffed Carrots with Lamb and Pine Nuts (p. 73) in which the carrots are steamed, cored and stuffed with a lamb mixture – better choose some very large carrots.

For the turkey, Salma includes a very Lebanese variation, Turkey Hashweh with Rice, Apple, and Chestnuts (p. 314). The stuffing is lamb with plenty of spices, along with apples and chestnuts. The idea is interesting since the lamb fat keeps the turkey moist, while all the spices in the stuffing (also placed between the breast and skin) flavors the meat.

To go with the turkey, you could make Sweet Potato and Sumac Phyllo Rolls (p. 338) or a pretty dish of Stuffed Baby Zucchini with Vegetables (p. 335). For dessert, you could tackle Baklava (p. 413) or one of its variations, or just a plate of Ma’Mool Cookies (p. 401) snuffed with dates and spice.