Monday Morning Cooking Club: The Food, the Stories, the Sisterhood (Harper Collins 2013), may sound like a movie script instead of a cookbook. Maybe one is in the works? Meantime, this is a personal book of recipes organized by the members of a Jewish women’s group who meet in Sydney, Australia to gather their best recipes and share stories.

The cookbook is the result of three years’ worth of Mondays during which the six friends and friends of friends gathered to cook and perfect their recipes – from 65 different cooks. 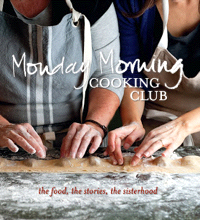 What’s lucky is that they really did come up with a fun cookbook that brings together loving stories of food and family with recipes from very different culinary traditions – South Africa, Germany, Harbin, Romania, England, Iran, Bombay and more. Each section covers one woman’s family recipes with headnotes that tell about where the recipe came from and how it is served. For instance, Merelyn Chalmers includes recipes from both her parents’ culinary traditions, Poland and Hungary.

They both came from observant families, but from completely different food cultures, so there was constant haranguing over which country made the best gefilte fish and matzo balls.

She includes Mum’s Rice Paprikash (p. 32) and her mother’s guarded recipe for Custard Chiffon Cake (p. 35) that can collapse unless you prop up the cooling pan with a bottle. Lisa Goldberg, the groups’ founder contributed a recipe for Egg and Onion (p. 78) – pure comfort food in her family’s Shabbat dinner, and Paula’s Calf Brisket (p. 79) made from a veal breast on the bone cooked slowly in the oven.

There are plenty of desserts and sweets recipes sprinkled throughout the book, like Evy Royal‘s Mamoul (p. 218) stuffed with dates and spices and her Hamantashen (p. 221). There are clever sweets with names like Gina’s Hair-Raising Honey Cake (p. 115) from

This is the kind of book that will inspire you to write down your own treasured recipes and share them with your family and friends.