If you are planning to tour around the world searching for great cake, Roger Pizey has beaten you to that game. The result of his search is World Class Cakes: 250 Classic Recipes from Boston Cream Pie to Madeleines and Macarons (Race Point 2013). So, stay at home and follow him from Singapore to Paris to Melbourne and Sydney.

Or stuff this book in your baggage before your round-the-world fling.

Or open it up when you want to recall that special cake you had in Athens or Mumbai. Chances are you’ll be able to whip it up quite easily from one of his recipes and the photographs by Sarka Babicka. Sprinkled throughout the book are city guides to pastry shops and cafes that serve inspired cakes and regional favorites. Look up a city you’ve visited and see if your favorite made it on the list. Read the headnotes – many are about a famous chef or pastry store – and others are about what makes the cake so special. For the Bara Brith, a currant studded cake from Wales, he writes:

Originally, Bara Brith included yeast, but I prefer this yeast-free version that tastes better the day after you have made it. You can eat it any day of the year, but why not bake it to celebrate St. David’s Day (the patron saint of Wales) on March 1. (p. 100) 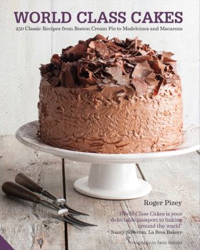 Roger organizes his cakes by kind – starting with Sponges & Layer Cakes to Celebration Cakes. It turns out that the US is not the only country to love little cakes – cupcakes and the like. A chapter on small cakes first celebrates the French confections, including a recipe for both plain and chocolate Madeleines (p. 152), Blueberry Financiers (p. 154) and Chocolate and Rum Canneles (p. 156) and finally Macarons (p. 158). If you are in Paris, there is a guide to the very best places to buy these little cakes and more from Laduree to Café Pouchkine. There is a section on British cakes, but then more unusual ones like Malpuas (p. 174) a kind of Indian pancake, or Tippaleipa (p. 175) a Finnish version of funnel cakes. Then he includes more recipes for fried cakes – donuts – like Churros (p. 178) – best to get them at Chocolateria San Gines in Madrid according to the city guide for pastry shops and cafes. Finally, the chapter ends with cupcakes and Whoopie Pies and Shannon Bennett’s Lamingtons (p. 188) Australian chocolate and raspberry sponge cakes coated with coconut so that, one imagines, they resemble lambs. For the city guide to Melbourne and Sydney (pp. 190-1) he lists Chez Dre in Melbourne and Adriano Zumbo in Sydney.

World Class Cakes with its picture of a chocolate Devil’s Food Cake on the cover (p. 44 for the recipe of this three-layer giant) will fill your house with cakes from around the world. Let your kids explore – before and after a family holiday – and find out what’s out there besides plain vanilla.