Instead of thinking about which pie cookbook to buy, consider changing the way you make pie. Move up from your Easy-Bake to a PetitePie Maker.

Super Chef tried out Chef’s Choice International PetitePie Maker to see what it could do – inviting some junior Super Chefs to take it for a spin. It makes nifty hand pies and tart shells in minutes. Rather like a waffle maker or a Panini Press, it cooks pie dough in four circular cups that can accommodate single or double crust pies. You cut the pie dough, fit it into the bottom cup, fill it, and then top it with another dough circle. There is a timer and a locking latch that are easy to operate and with some supervision. Super Chef suggests that if a child can use a stove safely, they can use a PetitiePie Maker.

The recipes that come with the machine are rather dull and un-tempting – suggestions for refrigerator biscuit and pie dough are good for short cuts, but teach kids how to make dough from scratch. Think empanadas or Cornish pasties that can be put together for an out-of-the-ordinary school box lunch. Kids can pitch in and make their own fun pies. Pile that left-over Chicken Stew or Boeuf Bourguignon into a pie crust, cover it up, and in a few minutes the PetitePie Maker has turned it into a little pot pie. Have some leftover winter squash or pumpkin? Make a mini-Pumpkin Pie. Turn chunky applesauce into Apple Pie. Make mini-Quiches or fill with a single crust with fresh berries and some whip cream. 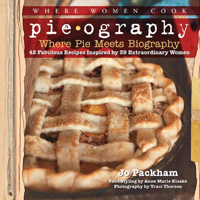 Most of the recipes in Pieography: Where Pie Meets Biography (WWC 2013) by Jo Packham will easily work with the PetitePie Maker.

Better still, there is so much to read in the book while you are counting off the minutes and smelling the sweet (or savory) aroma of pies cooking. Biographies of the women chef and cooks precede their recipes. Try Dyan Carlson’s Heirloom Tomato and Goat Cheese Pie (pp. 26-7) with the last of the summer’s crop. Sarah Beth Smith has a rustic, stick-to-the-ribs Savory Bacon Mushroom Pie (p. 50) would stand up to a cold walk to the school bus. Vanessa Brantley Newton has a Low Country Sweet Potato Pie (p. 116) that she makes in a cast iron skillet – but the PetitePie Maker will do just fine. And if the kids don’t feel like pie, but want a cookie instead, cook up Cookie Dough Frisbee Pie (p. 124) Jessie Oleson’s argument-ending contribution.