There is something dreamy and yet thoughtful about Frances Mayes writing. Her new memoire, Under Magnolia (Crown 2014) has more than great Southern food going for it. It is a coming -of-age story about growing up in Fitzgerald, Georgia surrounded by a dysfunctional family and an African American housekeeper. It is her voyage out and away – and back. She paints vivid pictures of her mother and father, while capturing how it felt to be a child in their house.

If you are a foodie reader – fan of her previous books on Tuscany – or new to her writing – then this book does not fail:

Every mother I knew could cook like the devil. There’s their jouissance, the fine, forgotten-in-English word. Pressed chicken, brown sugar muffins, quail (smothered), Sally Lunn bread, grits with cheese, a spectrum of pies with lemon meringue as the lowest and black bottom as the epitome. Lane Cake (which no Northerner could ever hope to emulate in this life or the next), and key lime when Mr. Bernhardt got in the Key West limes at his fruit stand. No matter what. Unconditionally, we will cook, from restorative broths to nutmeg custards to grand heroic meals. (pp. 25-6)

The cooking fills the lives in Under Magnolia and fills the pages with eating, savoring, and sharing. 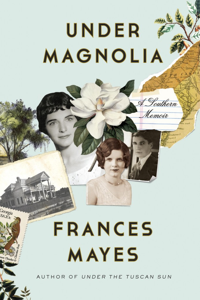 You may wonder what a Lane Cake is, even if you are a Northerner. An Alabama specialty, it is essentially a layer cake with a filling of bourbon-soaked dried fruit. The Lane Cake comes up towards the end of the book, alas without the recipe:

On certain Sundays, our church offered dinner on the grounds and my mother would bake a stupendous Lane Cake or, what still makes me feel deep lust, her famous three-layer Caramel Cake. Daddy preferred her Lemon Cheese Cake – not a cheesecake at al but cloud-soft layers of butter cake, with thick curd filling that must have reminded someone of cheese. Maybe it’s the food of the South that makes its children long so for home. (p. 270)

Could a Southern cookbook be in the works (with that Lane Cake recipe, of course)?

On the cob may be the preferred southern way, but I always have loved this spicy corn that you toss together in a black iron skillet, which was called the “spider” when I was growing up in Georgia. The recipe calls for butter, of course, but I now use fresh, fruity olive oil. You can add yellow and green bell peppers if you want, and hot peppers if you want to up the heat. If you use a small jar of pimiento instead of a fresh one—they’re not always easy to find—add it at the end. If you’re grilling chicken, this is a great summer side dish.

Instructions
In a large skillet, melt the butter and sauté the onion and celery for about 5 minutes on medium heat. Add the corn and pimiento, stir and keep cooking about 5 more minutes. Stir in the rest of the ingredients, except the parsley, turn heat to low, cover the skillet and simmer for another 10 minutes. Remove the cloves and stir in the parsley.