Janna Gur writes exceptionally good cookbooks about Jewish cuisine. Her latest, Jewish Soul Food: from Minsk to Marrakesh (Schocken Books 2014) is no exception. But it is a very different book from her previous, The Book of New Israeli Food. Here she explores more traditional, regional dishes, as they exist outside of the melting pot of Jewish Israeli cuisine. In her introduction she underscores the reasons why Jewish cuisine is so significant. “Kosher dietary laws precluded their using certain foods and combinations, even more importantly these laws, which progressively became more strict and all-encompassing, imposed on them a degree of culinary isolation: Jews not only cooked and ate differently, they were not allowed to sample the nonkosher foods of the Gentiles. (p. xiii) Jewish food is central to holidays and to the very identity of Jewish communities. Gur’s aim is to record the cuisine of different communities before the differences disappear. And yet, she also captures the inventiveness of cooks encountering different Jewish cuisines from the diaspora – and it is that inventiveness that is at the heart of what makes Jewish cuisine so interesting to everyone. 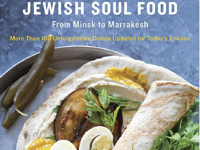 Each recipe includes the country or group from which it originates. So, it’s easy to create a meal of only Moroccan Jewish dishes or only Bukharin or Syrian. In the soup chapter, you might want to make a classic Ashkenazi Kneidlach or Matzo Ball Soup (p. 41) or a version with fava beans and peas, Passover Green Chicken Soup (p. 43). But if you want something that looks like matzo balls but isn’t, try the Persian Gondi Nohodi or Chickpea and Chicken Dumplings in a Turmeric-Lime Broth (p. 44) with chickpea flour and ground chicken dumplings. Gur adds one more inventive Israeli recipe for Gondalach, a creative variation on dumplings in soup from Chef Erez Komarovsky.

Following the theme of meatballs, the next chapter focus on Meatballs, Fish Balls, and Stuffed Vegetables. Unusual recipes include Kebab Gerez (p. 63) or Meatballs with Sour Cherries from Syria and Persian Fesenjan (p. 65), which in this version is Meatballs in Walnut and Pomegranate Sauce instead of the usual chicken thighs. There is also a garlicky Herbed Fish Balls with Jerusalem Artichokes, Tomatoes, and Saffron from Morocco (p. 67).

Gur included a chapter on Shabbat recipes, though she says many of the recipes in the book of served for Shabbat. “In this chapter, you will find those specifically developed by Jewish cooks all over the world to comply with strict Shabbat rules: no lighting of fire and no manual work. It is fascinating how these restrictions gave birth to some of the most interesting Jewish foods.” These include T’bit (p. 149) Iraqi Stuffed Chicken and Rice Hamin with Honey and Spices. A whole chicken is stuffed and surrounded by a rice and spice stuffing, and then baked at a very low temperature oven for eight hours. It emerges in the photo by Daniel Lailah, a deep brown from all the spices and juices. There is a beautiful double page spread of Iraqi Sabich (pp. 157-9) Egg and Eggplant Shabbat Breakfast Sandwich with fried eggplant slices, Tahini spread and Spicy Mango Relish or Amba.

Gur is an exuberant writer who clearly enjoyed investigating and sampling all the varieties of Jewish cuisine she assembled in Jewish Soul Food. It is a book that both looks back at what makes each community unique, while looking forward to how each community introduces its food to the rest of the world. You will find gems here to make in your own kitchen.