It’s been over twenty years since the birth of Miss Piggy, but can you ever know too much about pigs?

Barry Estabrook‘s Pig Tales: An Omnivore’s Quest for Sustainable Meat (W.W. Norton 2015) will fill you in on anything you didn’t know already in entertaining and engaging stories about his search for true pigginess.

The first chapter is about the intelligence of pigs. Perhaps you don’t want to know that the pig you are eating is more intelligent than a smart three-year old, and that pigs have been raised to use computer? But the information doesn’t detract from Estabrook’s goal of finding out all he can about what makes pig so special. He describes the experiments conducted by Candace Croney, who was challenged by animal behavioral scientist Professor Stanley Curtis, to test pigs’ intelligence by teaching them to use computers. She started with piglets and taught them much like one would teach a child:

Producers who claim that they want to do the best possible job and that they are serious when they say they want their animals to be as comfortable, clean, and healthy as possible, even under factory-farm conditions, have an obligation, in Croney’s view, to understand the cognitive science that already exists and incorporate it where possible. (p. 37)

Funding for this kind of research has dried up, says Estabrook, because it comes from agribusiness, which sees no value in finding out about pig intelligence. 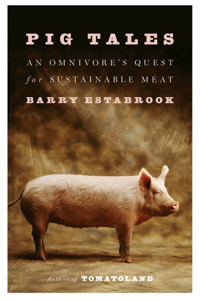 The following chapter deals with feral pigs. He rides along with John Mayer searching for wild pigs in South Carolina, he hangs out with wild pig expert Cody Fritz, and finally he orders a 3-pound shoulder of feral pig from Kenneth Calvin Cunningham’s Broken Arrow Ranch.

I more of less followed his instructions (my local convenience store did not carry margarita beer so I substituted a can of Bud), and I have to say, it made for some spectacular tacos¬–the meat moist, rich, and lean, neither gamey nor overly “porky.” When I called Cunningham to thank him for one of the best meals of the summer, I mentioned that I was coming to Texas. He told me he had sixty-seven wild pigs going to slaughter and that I should drop by and see them. (p. 61)

Evidently, learning about the innate intelligence of pigs does not mean you are going to swear off eating them.

The book is filled with great facts, like there are 750,000 wild pigs killed in Texas a year, about 1/3 of the population, but only 100,000 are eaten. You’ll learn that when Christopher Columbus sailed on his second voyage in 1493 he brought 8 pigs. They were left on Hispaniola and flourished there and on other islands providing a supply of pork for the returning sailors.

Pig Tales is an engrossing and readable book. It has a good endnotes and a bibliography if you want even more. It’s definitely worth reading during your Sunday morning breakfast of (sustainably raised) bacon and eggs and Sunday lunch of pulled pork sandwiches and Sunday dinner of smoked pork chops.