Aaron Franklin‘s Barbecue joint might just be the goal of many road trips this summer (see BBQ Week: Franklin BBQ), but Johnny Fugitt thinks that road trippers should make a stop nearby for some even better ‘cue.

His 100 Best Barbecue Restaurants in America (Renew Press 2015) is a yearlong study of America’s BBQ from the point of view of one person searching for his personal best barbecue. ” I visited 365 restaurants for this project, but only 27% could make the Top 100. I ranked the Top 25 and listed the other 75 by region. (p. 87)”

SPOILER ALERT: Super Chef is going to give away that top stop. It’s Kerlin BBQ in Austin, Texas, down the road from Franklin BBQ, which is to Johnny’s taste bud’s, only #7. 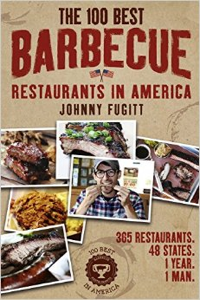 While most barbecue restaurants let brisket rest in a wrap (butcher paper, saran or foil), Bill keeps his on the smoker until they are ready to be carved and served. He starts with a thicker bark than anyone else by smoking at such a high temperature and by not wrapping, serves the crunchiest, tastiest bites of barbecue found anywhere.

Johnny spends the first half of the book defending his mission and his abilities to judge good barbecue and describing his own personal preferences. He includes a “day in the life of” complete with an ode to his Subaru. He describes how he finds BBQ joints and how he managed not to gain weight in a year of so much tasting and eating. The reviews are full of interesting facts and reasons why each restaurant is on his list. Of course, many restaurants are not on his list – but enough are to make this a fun book for a barbecue-devotee.

Summer is here and maybe a road trip is on your list of to dos. You don’t have to drive to Texas – #2 is in New York.