A new cookbook from the legendary Joyce Goldstein arrives just in time for Passover.

Maybe you can make ethereal matzo ball soup, luscious brisket, and sumptuous potato latkes, but think of all the new recipes and great ideas you can glean from The New Mediterranean Jewish Table: Old World Recipes for the Modern Home (University of California Press 2016). This is a dense book filled with great recipes and great head notes that will help you create a perfect celebration of Middle Eastern food.

It’s spring, so start your meal off with Green Puree for Passover (p. 128) a fava and pea soup:

I apologize in advance for asking you to shell 5 pounds of fava beans, then peel the beans and then shell 2 ½ pounds of English peas. But this soup is worth the effort.

How about a pre-dinner party where the guests shell peas?

If you’d rather see your guest once the soup is made, choose Asparagus Soup with Saffron from Vemeto (p. 130) perfect for that tiny jar of saffron at the back of the spice cabinet since your trip to Normandy last fall (where the saffron in Le Perche is some of the best worldwide). 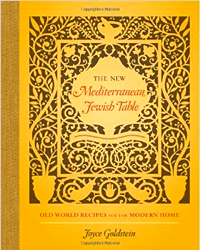 Asparagus are in season, but so is rhubarb. Skip strawberry rhubarb pie, the more unusual Fish with Sephardic Tomato and Rhubarb Sauce (p. 242):

The original version of this recipe from the Jewish community of Rhodes calls for swordfish, but some rabbis forbid its use, as it does not have scales for the fist six months of its life. I have suggested other fish here. You can also pair this sauce with a whole poached fish.

Or go with Turkish Lamb with Green Garlic (p. 314) that calls for more fava beans, and plenty of Aleppo pepper.

To finish off the meal, there are plenty of Passover cakes like Passover Hazelnut Sponge Cake or Sephardic Walnut Cake (p. 292) or Sephardic Orange and Almond Cake for Passover (p. 394).

This is just an attempt to pick out recipes for one dinner – but this is a book that would be hard to exhaust cooking year round, whether you are Jewish or cooking for Jews, or just love to cook Mediterranean food – for most recipes would be familiar to the non-Jewish populations of Turkey, Greece, Egypt, or other countries on the Mediterranean Sea. After all, she even includes a recipe for Bougatsa (p. 410), that cream-filled filo pastry made best in Ioannina (and at the Alfa Pie Shop in Washington DC (see Super Chef’s coverage) run by chef Argiro Barbarigou.)

Maybe it is time to try to make your own?