Michael Psilakis: How to Roast a Lamb

Greek cuisine and Greek celebrity chefs are proliferating faster then you can say “Efkharisto poli!,” or “Holy Percy Jackson and The Olympians, Batman!” 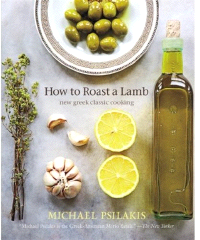 Michael Psilakis’s How to Roasts a Lamb: New Greek Classic Cooking (Little, Brown 2009) is probably the most ambitious and the most personal cookbook. It is a handsome book that is part family remembrance and part recipes that attempt to define Haute Grecienne Cuisine.

Michael’s purpose behind writing the book is much the same as his drive to open a restaurant in Manhattan after succeeding on Long Island with Ecco:

I decided that I wanted to give it a try. I wanted to open a restaurant in New York City with a purose-to teach people about what I had learned as a child, to transmit that culture and heritage through my Greek cuisine. My goal was to elevate Greek food to its place alongside French and Italian food. (p. 11)

That is a goal echoed by Charlie Palmer when he opened Aureole in New York and tried to elevate American food alongside French and many other chefs. But this is also a highly personal book, written with Michael’s immigrant father in mind, his food, his garden, and his hunting trips.

The essay on Michael’s first hunting trip is really about the whole experience that informs how he approaches game and food in general. At the ripe old age of seven, his father takes him out for a rabbit hunt along with various uncles and their kids:

I sat bolt upright. For as long as I can remember, I’d been begging my father to let me join him on one of his fabled hunting trips…This invitation meant that-in my father’s eyes and in the eyes of my family-I was becoming a man. (p. 112)

There is a pause when young Michael contemplates the dead rabbit that had been alive moments earlier, but that is translated into respect for game. His mother and his aunts transformed the rabbit into kouneli stifado, a hearty rabbit stew. Michael has recipes for Grilled Rabbit Confit (pp. 117-8) with plenty of whole garlic, cardamom pods, and anise, as well as Lemon Puree. There is also a recipe for Rustic Braised Rabbit with Hilopites Pasta (pp. 118-9), a sort of roughly rectangular pasta shape. There are more recipes for pheasant, quail, and venison. There is a wonderful photograph by Christopher Hirsheimer of glorious quail on the grill with a bowl of charred onions and red wine glaze. Just the sort of rustic flavorful dish that would make a find meal on a cold night.

Even though these are recipes for home cooking, they are by no means simple. Michael includes numerous time-consuming steps. Be prepared to spend some serious time in the kitchen before you get to the table.

There is plenty to explore in this lovely, carefully written book. It does not capture every dish in Greece, but it does present a personal narrative with the recipes that make up a life. It would make a fine holiday gift for anyone passionate about Mediterranean cuisine.

Following is a simplified game recipe to enjoy. Buy the book for the full recipe.

One comment on “Michael Psilakis: How to Roast a Lamb”