You will find a joyous, boisterous, enthusiasm whenever James Villas writes about his love of pork.

Even words like oily and fatty sound luscious and tempting:

No matter where I travel in Dixie, there’s never a moment when I’m not sniffing out a new brand of country sausage, a different style of pork barbecue or roasted spareribs, an intriguing country ham spread or a bacon dip, or an increasingly rare but sapid hog’s head stew (p. xi) 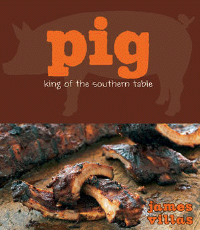 It must be quite satisfying for him to have penned Pig: King of the Southern Table (Wiley 2010), and been able to test all his recipes, scour farms for great hams, and ponder about so many pork-y stews with names like Burgoo and Brunswick Stew. Of course, anyone familiar with Villas recent work will know how much he loves his hog. Bacon (2007) (see review) and Stews, Bogs and Burgoos (1997) attest to his continued love affair with all things pork. But what makes this book so welcome is that Villas can finally bring together his very Southern recipes on all the edible parts of pigs.

Super Chef took a close look at the chapter on Pies, Loaves, Hashes and Burgers. If you think of pork pies as some handy British schoolboy treat, think again. These pies are made in pie tins for slicing and sharing.

The first is an Old-Fashioned Pork Pie with Biscuit Crust (p. 147) that includes lean ground pork and sage in a buttery crust. Then there is a Texarcana Pork and Bean Pie with Cornpone Topping (pp. 154-5) – think of it as chili con carne topped with eggless cornbread.

Great Smoky Bacon, Country Ham, and Sauerkraut Pie (pp. 158-9) a kind of Southern rift on choucroute garnie, though it’s likely that is not what Villas had in mind. The crust is made with lard (from the pig) and the filling is a mixture of sauerkraut, chopped country ham, nutmeg and caraway.

Southern cooks find nothing lowly about a well-made hash, and when it comes to serving one on a breakfast or brunch buffet, imaginations can run wild, as in this crusty beauty boasting three forms of pig and many different flavors and textures.

Here is a writer who searches out such intense recipes that you can almost imagine him rolling up his sleeves as he sits down to a plate of hash.