In The Hundred-Foot Journey (Scribner 2010), the story of a “lowly Indian chef who conquers the elite world of French haute cuisine,” its author has written a book bound to catch the attention of prowling Foodies. This is a rollicking food-lovers tale. Summer readers will be all-too-lucky to happen upon this quiet treasure.

Note well that in this his first published novel, author Richard C. Morais sets himself a high bar. We have in Mr. Morais an American daring to write in the tongue-and-cheek style of great modern Indian authors. That list starts with Salman Rushdie. 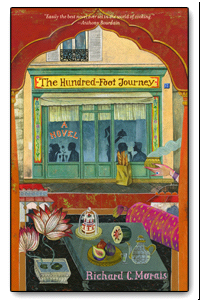 From first to last, Morais scores well on his novel. He focuses and maintains a near-constant sense of delight in the mad mishaps of life that is a hallmark of the Indian genre he has joined. His unlikely hero, Hassan Haji (an Indian Muslim — in tribute to the Muslim- and Indian-born Rushdie?), flees religious troubles in India, bumbles through England, and lands finally in the destined new homeland of France. There, in a country less-than-welcoming to immigrants like Indians, the young Hassan chances upon the people and the food that will shape his destiny.

(The book has undergone an interesting publishing journey of its own. A shorter version appeared in India in late 2008, published by HarperCollins India. Simon & Schuster imprint Scribner has now published this longer version.)

However, lightness of tale and tone, even when aided and abetted by sumptuous descriptions of inventive culinary dishes, rarely raises a novel to greatness. For, as his hero, Chef Haji, strives for perfection in food, no doubt too does Author Morais in literature. Alas, in his search for balance of content and form in this instance, lightness overshadows darkness in a way that lessens greatness. (In similar fashion, darkness obscures lightness on Rohinton Mistry‘s A Fine Balance — an acutely brilliant novel but so dark it nearly stifles its constant, humorous irony.)

For example, while lolling about aimlessly in England, young Hassan falls for a British-raised Indian girl. He describes her face as “pocked by a few old acne scars” yet “permanently lit by the most intriguing smile.” The relationship serves to show how family tragedies in India have cut Hassan off emotionally from other people. However, the outcome of this episode is neither hot nor cold enough to affect the reader. So naively does young Hassan find himself positioned “for a good nuzzle of her coconuts,” that his sexual encounter bypasses any description of climax to come too quickly its aftermath: “And that night, after a good bounce…” (p. 47) The jaunty tone and clever references to food wind up undermining the author’s chance of stamping upon Hassan (and readers) a measure of his own distance from other human beings. This would help explain further his deep ties to the kitchen.

While the novel brings to mind several books by Rushdie, The Hundred-Foot Journey does not quite achieve Rushdie’s multi-layered depths. Take Rushdie’s Haroun and the Sea of Stories. This is not just a child’s fairy tale, despite the form. Nor is it just an allegory for certain problems in India. It is also an allegory about problems facing literature itself. Now, The Hundred-Foot Journey scores high for story. And it scores well for involving problems in immigration and acculturation. The language is high-class fast-casual (see excerpt). However, where is the still-deeper story?

This observation intends in no way to disparage Mr. Morais’ effort here. Rather, it seeks to encourage him to have at it — again and again. Certainly, he will not be starting from scratch. If The Hundred-Foot Journey does not quite make for great literature, it has many trappings and betrays deep desire to reach that summit. Think of this novel as a most satisfying amuse bouche that leaves us the readers aching for more — several courses, please.

(Image of Salman Rushdie from Wikipedia and of Richard C. Morais from the author)