It’s not just that it’s the future food of astronauts to Mars, according to NASA.

It’s the basic nutrition that comes packed in a grain that grows in less desirable soils, thanks to its spartan upbringing in the Andes by the Incas.

So say Claire Burnett, MSc, and Laurie Scanlon, PhD, of Keen Ingredients, Inc., in their impressive introduction to Quinoa (Whitecap 2010), entitled “The Mystery and History of Quinoa.”

It’s quinoa time — but authors Patricia Green and Carolyn Hemming do not follow up this scientific act sufficiently.

Oh, their cookbook bulges with quinoa-adapted recipes! But missing is real creativity with the “pseudocereal” grain itself. In fact, where are the recipes of Peru and Bolivia, for starters? Are the other ingredients too hard to find? Or do the authors believe them uninteresting to the curious-types who would shuck out for a curio cookbook like Quinoa? 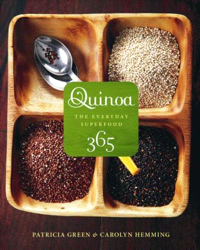 Otherwise, recipes tend to target the already-organic (like “Blueberry Flax Hot Cereal,” p. 13) or the hearty, Mediterranean-Middle Eastern (like “Cucumber Mint Salad,” p. 45). Off the authors go, substituting quinoa for other ingredients or simply adding it as a hidden health supplement. Thus, we find for soups “Beef Vegetable Quinoa Soup” (p. 61, with quinoa for barley) and “Roasted Red Pepper Tomato Soup” (p. 70, with quinoa flour added). These recipes are a just a good reminder to reach for the versatile grain and add it instead of other grains.

There is no issue about “Where’s the beef?” here, but there is some issue over real value add. How about a more intriguing yet descriptive title? A la horror movie: The Ghost of Quinoa? A la suspense: The Quinoa Proxy? Or a pure grabber: The Supplanter?

There are no politics here, either: nothing about sustainable agriculture, slow food, etc. The issue is not about beef at all: where’s the sexiness in quinoa?

Clearly, Quinoa 365‘s message is that this non-grain grain should be for “everyday,” but whether it is inspiring is another issue.

3 comments on “Quinoa 365 by Patricia Green and Carolyn Hemming”