Think of the US heartland and you might think first of Sarah Palin, tornado alley, or rust belt cities. Judith Fertig wants you to think about food. Heartland: The Cookbook (Andrews McNeel 2011) is about celebrating small town life and the food of the Midwest:

All of this is reflected in the Heartland kitchen, where dishes hark back to the farmhouse kitchen, take their cues from comfort, add a twist of ethnic heritage, and yet still celebrate what’s fresh in the garden or foraged from the wild. (p. xiv)

There are plenty of location photographs by Jonathan Chester and food photographs by Ben Pieper that will convince you that America’s food revolution truly has gone coast to coast. Judith weaves quotes from early 20th century cookbooks, Willa Cather, Garrison Keillor, and other writers to invoke the richness of life in the Midwest – it makes for a very readable and rich book. 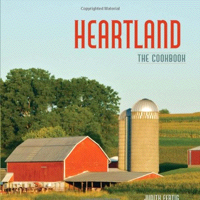 The first chapter on Praise and Plenty: The Heartland Pantry skips the usual list pantry necessities and starts with recipes for Farmhouse Butter (p. 7) and Home-Rendered Lard (p. 10) and further along a recipe for Red Haven Peach Chutney (p. 18), for eating with pork, chicken, or on bread. There are also recipes for various preserves – Quince, Sour Cherry, and Wisconsin Cranberry Jam (p. 32). She writes about Justin Rashid and Larry Forgione’s company based in Northern Michigan that makes excellent preserves, jams, and spreads, but oddly doesn’t mention the name – American Spoon Foods (p. 31).

The next chapter covers breakfast and brunch. Judith includes a list of her top bacon producers and a recipe for making Double- Smoked Bacon (p. 46) using store-bought bacon smoked on a backyard grill. There are decadent treats like Leon-Ricotta Pancakes with Blackberry-Lavender Syrup (p. 50) and Baked Eggs with Prosciutto and Asiago Cream (p. 53) and a Savory Wild Mushroom Strudel (p. 62). She includes a list of strudel bakeries for a Strudel Town tour (p. 62). The photographs throughout the book could use captions (they are at the back of the book) – where is the market selling cheeses and crocks filled with something on page 199 – and who is the Asian man so often in the pictures?

There is plenty to tempt in Heartland including the blue-plate specials that really gets to the ethnic diversity of the Midwest – underscored in a list of Heartland Sausages (p. 187) that includes Poltavska, a Ruassian–Polish sausage and Potatiskorv, a Swedish sausage. There is a long list under Resources (pp. 266-269) so if you are craving some midwestern food, you can order the raw ingredients online – or go for a summer road trip!