The word has the rhythm and the sound of Spanish castanets. It brings to mind large family and friends gathering around an enormous dish of saffron rice filled with wonderful seafood and meats, children laughing and a cool glass of sangria.

However PAELLA (Phaidon 2011) is also a marvelous cookbook, the oeuvre of Chef Alberto Herraiz. Alberto was born in Cuenca in the Spanish province of Castile-La Mancha. Born in a family of restaurant owners he was brought up among the kitchen aromas where the Paella took first place. After having worked for several years in restaurants, Alberto moved to Paris 1997 to open a Spanish restaurant, Fogon, where he featured Paella. Parisians flocked to his restaurant, which earn a star in the Michelin guide in 2009.

For 15 years Alberto worked – he researched the history and the art of the various Paella dishes. He discovered that there are a multitude of recipes, one more exciting than the next, and so the book” Paella” was born. He writes:

The real subject of this book is Paella defined as a statement illustrated by recipes…Like the Italian risotto, the Paella has infinite possibilities. Just use your imagination.

The book has an unusual cover made of a white cloth stitched in red at the seams – almost like an apron or a tablecloth – and has more than 108 recipes. (It looks great on a library shelf!) The handsome photographs by Jean-Marie del Moral show ingredients and demonstrations of technique that make the book extremely easy to follow.

Alberto begins with an overview of paella, including a history of rice brought to Spain by the Muslims, probably from Persia. Rice being an important element in the making of the dish is here discussed with simple suggestion of how to choose, clean and cook the best rice for this dish. He explains that Bomba rice is the most highly sought after for paella because it can absorb liquid exceptionally well and its expands lengthwise.

Regardless of the variety you choose, the rice must be of top quality, with no bits in it or broken grains. Damaged grains will release starch and make the rice sticky. (p. 20)

He goes over the main types of paella from Traditional to Paella Ciega (without bones or shells) and Paella En Costra (in which beaten eggs are poured over the paella when it is almost done and it is finished in the oven.) 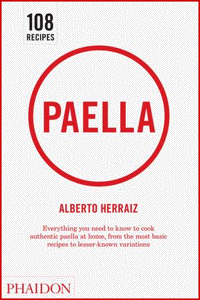 Then Alberto explains the need of specialized utensils. There are many kinds of Paella dishes depending mainly on the number of guests and /or if it is cooked on top of the range or baked. (I once ate Paella made for 200 people, the largest paella dish I had ever seen!). The choices go from the simple iron paella for two to expensive stain steel ones for 300. I prefer, after reading all his explanation, the cast iron ones for 4 to 6 guests.

Spices play an important role here, especially Sofrito a spice mixture made of a selection of ingredients such as garlic, onions tomatoes, pimentos, olive oil, and your own spices – Alberto believes in using your imagination – your own combination of peppers, lemons etc. He teaches you how to make seafood stocks and fumet, as well as black stock made with cuttlefish (p. 45) and flavored oils like Lobster Oil (p. 62).

The recipes are divided up between paellas cooked on the stove, on the barbecue, paellas without rice, and sweet paellas. The recipes range from a Paella Rive with Chicken, King Prawns (Jumbo Shrimp) and Squid (p. 78) to a more complex Paella with Left-Overs that includes chicken, chorizo, morcilla, and leftover vegetables (p. 82) and a the luxurious Paella Rice with Eggs and Black Truffle (p. 86). If you are by the sea, the book includes not one but two paella with lobster and more with langoustine and crayfish including then try the glorious Paella Rice with Lobster (p. 102) with lobster oil, squid, and saffron.

Then not to be classic Alberto offers something quite unusual: Paella with no rice. He uses either vermicelli, barley, bulgur or, even better, Quinoa with Spring Vegetables (p. 106). What better dish can you serve on a summer day?