First Lady Michelle Obama‘s book, American Grown: How the White House Kitchen Garden Inspires Families, Schools and Communities (Crown 2012) is out in April. It looks like it has inspired many inside the White House already. 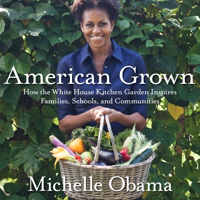 The Associated Press published an article recently about White House Pastry Chef Susie Morrison‘s amazing makeover. She lost 30 pounds in 18 months, and she isn’t the only White House staffer to sign on to Michelle Obama’s campaign to eat healthy and fight obesity.

AP reports, “Morrison, two chef colleagues and an assistant curator have lost more than 110 pounds since July 2010. They have kept the weight off so far.” Those include White House Executive Chef Cristeta Comerford, Assistant Chef Adam Collick, and Assistant Curator Lydia Tederick.

It’s tough to lose weight, exercise, and keep healthy when surrounded by free food – especially if you are the one making cakes, sweets, and treats. Many chefs outside the White House have been waging the battle of the bulge with success, but it must be just a bit easier if your boss is the First Lady:

White House chefs will soon begin preparing for a holiday season that, despite Mrs. Obama’s focus on eating healthier, still serves up traditional, calorie-laden fare at dozens of parties and receptions that jam the calendar between Thanksgiving and Christmas.

Inspiration for us all!