Have you ever visited Vienna in the last days of the Austro-Hungarian empire?

There is still a way back, if memory will service — the memory evoked by The Viennese Kitchen: Tante Hertha’s Book of Family Recipes (Interlink Books 2011). 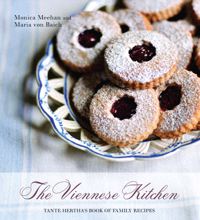 Maria von Baich inherited a little brown recipe book, written mostly by Tante Hertha throughout her lifetime. Recently, she passed the book down to her daughter, Monica Meehan. Together, they have retraced the life and cooking of their family to days before Ten Days That Shook the World and the assassination of the Archduke Franz Ferdinand, which ultimately led to World War I, the dismemberment of the Austro-Hungarian Empire, the rise of two states called Yugoslavia, and the expropriation of Austrian lands under Josip Broz Tito, sending this family into exile.

The Viennese Kitchen lets readers taste while looking at snapshots of the old country and family tales. The text is light with tints of nostalgia. The recipes are simple and easy to reproduce at home.

Missing only in this book is the vantage point of readers unfamiliar with Austrian cuisine. There are no headnotes for any recipes. If only one photograph appears on a two-page spread, it is a period piece rather than photo of the food prepared. The photos by Tara Fisher make the food look delicious: there are simply not enough of them.

Nevertheless, this cookbook would make a lovely present to anyone interested in food with its history.