What kind of munchies do you set out for your guests when you invite them over to watch a Vegan movie like Vegucated? If you think it will turn them into vegans, put out some foie gras, meatballs, and mortadella – or maybe just a thick steak. It might be their last carnivore meal! Vegucated is now available as a DVD, so Super Chef took a look.

Vegucated is a guerrilla-style documentary – low budget, minimal crew, mostly handheld camera – in which the filmmaker, Marisa Miller Wolfson, follows three New York City volunteers who give up their diet and lifestyle to follow a vegan diet and lifestyle for six weeks. The point is to see if the vegan lessons they learn will stick, and to convince viewers to consider a vegan lifestyle. 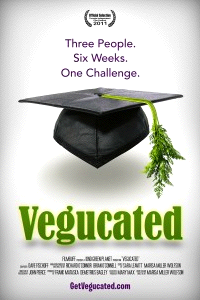 The volunteers themselves are key to the story. Tesla is a Peruvian-American student whose father cooks plates of meaty Latin dishes. A single would-be actor, Brian, has a German mother who raised him on meaty dishes. Lastly, Ellen is a single mom of two young kids who doesn’t know how to cook. She is a stand up comic and, along with the other volunteers, end up adding some laughs to an otherwise serious documentary. Ellen’s two kids benefit most from the change in diet. Each of the volunteers has a mix of reasons for signing up including a desire to be healthier, loose weight, and feel better. None of them are initially very concerned with the ethical issue at the center of veganism – that it is wrong to eat and use animals.

They start by learning about food – tofu replacements of meat products, conventional foods, like Oreos, that are vegan, and non-dairy butter. They visit a doctor, a gym, a clothing store without animal products, and learn the risks of eating meat. Then they are shown films like Food, Inc and visit commercial farms and an independent small farm to see for themselves just how badly animals and birds are treated. What they don’t see are well-run small farms that do treat their animals well.

Each of the volunteers faces difficult choices as well as relatives and friends who try to make them eat animal products. It is the Latina who faces the most difficult decision, since shared food is the basis of her relationship with her family. It is sad to watch her negotiate some balance – when very little is offered on the vegan side. This is an all-or-nothing lifestyle – or is it?

Vegucated raises some very interesting issues about food and lifestyle choices. If you are thinking of becoming a vegetarian or vegan, it will nudge you, or help you understand others who have decided to take that path.