The best Valentine’s Day gifts represent something more lasting then satisfying a sweet tooth – maybe giving something that has been around for over a century – and lasts and lasts – would speak volumes about love that lasts and lasts. Think cast iron. Sturdy, versatile, beautifully designed, and earthy.

Joseph Lodge founded the Lodge Case Iron Company in 1896, opening a foundry in South Pittsburg, Tennessee, where he produced cast iron pots and pans. His family-owned company still makes some of the best cast iron products to be found. The Lodge Logic Series that is foundry-seasoned means that it’s easier to start to cook great meals with a new pan immediately. 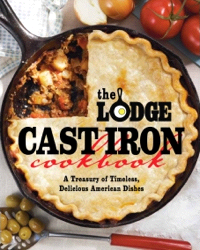 That’s easy. Get The Lodge Cast Iron Cookbook (Oxmoor House 2012) with recipes compiled and edited by Pam Hoenig. It is a celebration of all kinds of cooking in cast iron – both in the kitchen and the outdoors – from professional cooks and home cooks including the winners of the National Cornbread Festival. Many of the recipes are for skillet dishes, and others for the various others shapes and sizes that Lodge produces.

Out of the Breakfast chapter, try Seasonal Breakfast Frittata (p 22) in which the egg dish is started on the stove and finished in the oven. Cast iron is naturally non-stick, so egg dishes don’t need Teflon to come out well. That’s true for David Waltuck‘s Shirred Eggs with Ham and Tomato (p. 22) made in a mini-5inch cast iron skillet – so cute for Valentine’s Day breakfast. You’ll need a Aebleskiver Pan for the pretty puffed fritters made by Sarah Kirkwood “Pat” Lodge on page 30.

Since this is a Southern company, there are plenty of gumbos cooked in cast iron Dutch ovens, like Duck, Oyster, and Andouille Gumbo (p. 61) from Marcelle Bienvenu and Gumbo Z’Herbes (p. 62) from John Currence. There is also the unusual Tennessee White Chili (p 64), a chicken and Great Northern bean stew flavored with cumin, cayenne and cilantro.

The best part about owning a sturdy Lodge cast iron skillet is that you can take it camping. The book includes a whole chapter on camp cooking, including a no-knead Heat-Wave Bread (p. 168) from Rose Levy Beranbaum. She also contributed Corn Fingers (p. 230) in the Nothin’ But Cornbread chapter along with an essay on her love of cast iron:

There is simply no equal to cast iron’s ability for keeping a perfectly even heat, whether at high or low temperatures. (p. 231)

Too true. So, treat your Valentine to Lodge’s Logic Series skillets and Dutch Ovens, get this cookbook, and cook right.