Giorgio Locatelli: Made in Sicily

Giorgio Locatelli‘s Made in Sicily (Ecco 2012) is a personal cookbook. On the cover are photographs by Lisa Linder of the chef with a bowl of food, a seaside town, a plate of seafood, cherry tomatoes growing on the vine, and perfect balls of ice cream. Each photograph is full of color, of sunlight, and summer. That’s Sicily!

It is the absolute belief that the Sicilians have in the ascendancy of the ingredients – over any kind of overcreativity or pretentiousness. Whenever I have eaten in people’s houses, or in restaurants, what I see is not the personality of the cook or the chefs coming out in the dishes, but the personality of the land and the sea (p. 6

Giorgio’s point is that, even though Sicily has been conquered by many who have introduced spices, foods, and cooking methods, it is the land and the sea itself that defines what is Sicilian food.

Giorgio starts (as any good Sicilian meal starts) with antipasti, which reminds him of mezze, the small dishes that are eaten with bread prior to the main course. He starts with an Insalata di mare, a seafood salad, (p. 18) made with celery, garlic, parsley, lemon and oil. In the photograph there’s a plate full of octopus, squid, shrimp, and mussels, but he explains that any boneless seafood will work. If you are only familiar with eating French snails with garlic butter, he includes a Sicilian recipe, Chiocciole a picchi pacchi, a fanciful name that he translates as Snails in tomato and dill sauce (pp. 29-31). There are two recipes for rice balls, one called Arancini di carne, or Rice Balls with meat and peas (pp. 37-38), resembles the Lebanese kibbeh balls made with bulgur wheat exteriors. In this case, Arborio rice is flavored with saffron and pecorino cheese, and filled with beef or pork, peas and more cheese. 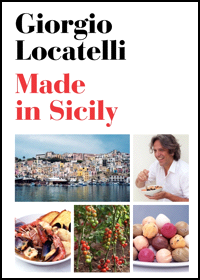 There are many unusual pasta dishes from Sicily including Casarecce con pesto di pistacchio (p. 197), short, twisted pasta. Could the pistachio also come with the Arab conquest of the island? Consider the different textures and flavors in Casarecce con broccoli, acciughe e pinoli, or Casarecce with broccoli, anchovies, and pine nuts (p. 204). Or the brilliance of the combination of ingredients in Pasta con le sarde, pasta with sardines, anchovies, fennel, raisins, and pine nuts (p. 215)

This is a dish that sums up Sicily for me: the Arabic combination of golden raisins, nuts and saffron (I think it needs lots) shows the history of the island, yet the ingredients themselves have been indigenous there since Classical times. (p. 215)

There are simpler pastas, like Spaghetti con gamberi e pistacchio (p. 219) with shrimp and a shrimp stock, that underscore the importance of seafood in Sicily’s cuisine.

The other chapters in the book cover seafood, meat – focusing on lamb, goat, and rabbit – ending with a lengthy chapter on desserts. Here again, Sicily shares sweets with its conquerors, as well as northern Italy. Pistachios dominate, along with granitas and ice creams.

Giorgio Locatelli is one of the UK’s best Italian chefs, so it is remarkable that he has set out to create a love letter to Sicily. To cook with his book, is to reach out to whatever is local, intensely flavored, and prepare it as a Sicilian would. Made in Sicily is full of Giorgio’s impressions, and photographs of the people of Sicily, and the food. It will lure you to Sicily.

If using salted anchovies, rinse and dry them. Run your thumb gently along the backbone to release it and you should be able to pull it out easily. If using anchovies in oil, drain them.

Toast the bread crumbs in a dry pan over medium heat, until they are quite dark golden brown. Take care not to burn them.

Heat half the extra-virgin olive oil in a pan and add the onion. Saute until softened but not colored, then add the anchovy fillets, stirring them until they “melt.” Add the wine and bubble up to let it evaporate, then add the ‘strattu or puree and bring back to a boil, adding just enough water to give a sauce consistency. Add the sardine fillets, raisins, pine nuts, saffron, and chopped fennel or soaked seeds. Taste and season if necessary, stir gently, and cook for 10 minutes.

Bring a an of water to a boil, add salt, then put in the pasta and cook for a minute less than the time given on the package, so that it is al dente. Drain, reserving some of the cooking water.

Toss the pasta with the sardine sauce and the remaining olive oil, adding a little of the pasta cooking water if necessary to loosen the sauce, and sprinkle with the toasted bread crumbs.