If only a cookbook could change politics! As in George Washington‘s day – feed a good meal to adversaries and bring their rational minds closer together.

Is food always a private affair – how one person tastes and remembers is different from another person’s – or are we all tied together with cultural flavors that swing this way and that, just as the boundaries between East and West or North and South slip and slide against each other?

Consider Yottam Ottolenghi and Sami Tamimi‘s Jerusalem: A Cookbook (Ten Speed 2012). If you don’t already own their first cookbook, Plenty, buy both together. They are exploring the reaches of their own personal food histories, while discovering what makes Jerusalem.

This book and this journey into the food of Jerusalem form part of a private odyssey. We both grew up in the city, Sami in the Muslim east and Yotam in the Jewish west, but never knew each other. We lived there as children in the 1970s and 1980s and then left in the 1990s, first to Tel Aviv, and then to London. Only there did we meet and discover our parallel histories; we became close friends and then business partners, alongside others at Ottolenghi. (p. 9) 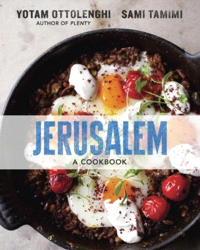 If looking back at childhood’s comfort food seems limited – this book goes way beyond that – exploring the history of foods and dishes – how parallel both their experiences were despite the political differences.

That parallel experience starts with salad:

Arab salad, chopped salad, Israwli salad –whatever you choose to call it, there is no escaping it. Wherever you go in the city, at any time of the day, a Jerusalemite is most likely to have a plate of freshly chopped vegetables – tomatoes, cucumbers, and onions, dressed with olive oil and lemon juice–served next to whatever else they are having. (p. 29)

Na’ama’s Fattoush is full of all the flavors the authors write about – sumac, mint, garlic, and parsley, along with buttermilk, which is unusual. There is also another green salad – Raw Artichoke and Herb Salad (p. 41) that you can’t help but feel better after eating. From this very large section on Vegetables, there is a light vegetable appetizer, Jewish Turkish Lemony Leek Meatballs (p. 44) from one of their friends, a Turk from Izmir. There is also a wonderful Tunisian dish, Shakshuka (p. 44), baked eggs in a spicy red sauce, similar to Turkish Menemen, and probably a large number of other regional dishes (not to mention Mexican huevos rancheros!). The point is, this is a city of immigrants who enjoy each other’s cooking. If you are looking for a Thanksgiving appetizer, what about Butternut Squash and Tahini Spread (p. 69) instead of the usual butternut squash soup?

The book is enlivened by food photographs by Jonathan Lovekin as well as photos of Jerusalem by Adam Hinton. The market scenes, the old men playing backgammon in a sparse café, and lambs strung up next to girly magazines for sale, bring Jerusalem alive.

Even when a dish seems ordinary, the version in Jerusalem is elevated and rethought – not only by interesting recipe notes, but also by the inclusion of so many spices – as in Mejadra, a rice, lentil and onion dish for sale as street food all over the Middle East. Jerusalem‘s version is rich with coriander, turmeric, allspice, cinnamon, and cumin. You can almost smell the fragrances coming from the mujdara piled up on a plate with the browned onions sprinkled in the photograph opposite.

Maybe someone will slip a copy of Jerusalem in the dining rooms and kitchens of world leaders, to remind them to add food to diplomacy. Meanwhile, why wait for them? Arabs and Jews are as close as a bowl of stewed beans or a salad.