Americans have struggle with how to translate their ancestors’ cuisine to a new country – whether their ancestors (or they themselves) came from China, France, Italy or some country (all except Native American). But America is not the only country struggling with this issue – there are plenty of other former colonies where the new population had to figure out the balance between replicating their home country’s cuisine and incorporating some or all the ingredients, cooking methods, and spices of their new country.

Sevtap Yuce‘s Turkish Flavours: Recipes from a Seaside Cafe (Hardie Gant 2012) finds that balance between traditional Turkish cuisine she grew up with and Australian sensibilities she adopted in her new home. Don’t skip the introduction. She sketches out her life in Ankara, her peasant family back in their home village, and the way the women cooked. She is an Alevi, which in Turkey means that although the family was poor, they came from well-educated elite who were generally less religiously strict than their neighbors. She ended up immigrating to Australia in an arranged marriage, ended up working with Bill Granger (whose light hand with food is evident in her cooking) and eventually became the owner of Beachwood in Yamba, on the mouth of the Clarence River and the Pacific Ocean. 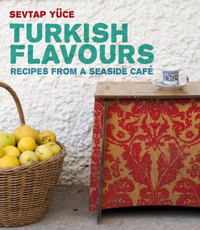 The book is full of vibrant photographs by Alicia Taylor of Sevtap’s food, Yamba, and the flora that surrounds it. It resembles the Turkish Black Sea coast – but it isn’t. This is Australia, and Sevtap has had to adapt to her new country.

For a weekend breakfast, start with tomato and pepper Menemen Eggs (p. 34) that in Istanbul are served in their own little frying pan. Turkish meze are justly famous – little plates of shared food that are perfect with raki or beer before a meal or instead of one. In Turkey, cooks are judged on how many wonderful eggplant dishes they can prepare – Sevtap has recipes for Baba Ghanoush (p. 50), Smoked Eggplant (p. 69) and Smoked Eggplant Salad (p. 84) along with Eggplant with Braised Beef (p. 123) and the classic Imam Bayildi (p. 127). There are also plenty of other dips including Carrot Dip with garlic yogurt and sesame seeds, and Beetroot dip with the mixed spice Dukkah (p. 59) that is based on ground hazelnuts. There is a good recipe for Turkish Bread (p. 53) and though she mentions making pide or lahmacun, she doesn’t give the recipe for this wonderful Turkish version of meat pizza (another book?)

Opposite a recipe for Chicken Kofte (p. 116) you’ll find an unusual recipe for Fried Sheep’s Testicles (p. 117), common enough in Turkey where lamb and mutton are eaten nose to tail, but not so common in other countries.

The dessert section features some very wonderful Turkish sweets like Baked Quinces with Yoghurt and Pistachios (p. 150) that would be traditionally served with thick Turkish cream called kaymak. Try one of the unusual recipes for cakes: Turkish Yoghurt and Olive Oil Cake (p. 153) or Sevtap’s own inventions like Pear and Hazelnut Cake (p. 154) or Lime and Polenta Cake (p. 155).

Turkish Flavours is a pretty cookbook by an accomplished chef. The recipes are easy to follow, healthy, and full of flavor – as long as you choose the best ingredients you can find. It is a welcome addition to the sparse number of Turkish cookbooks.