For those of us that are die-hard Downton Abbey fans, it has been a tough, long wait for the third season, which started on January 6, 2013. Now, it’s still a long wait for each additional episode – but for foodie fans, respite comes in the form of Larry Edwards‘ Edwardian Cooking: 80 Recipes Inspired by Downton Abbey’s Elegant Meals (Arcade 2012).

Since the focus of much of the downstairs action is in the kitchen, it makes sense to try to recreate some of the glorious meals that the upstairs ladies and gentlemen would potentially have eaten. The book covers High Tea, and Dinner, relying only on ingredients that would have been grown on the Abbey’s grounds. 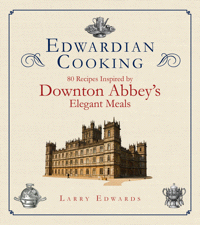 During the time-span of this book, Europe was engulfed in the horrors of World War 1. Due to this, the culinary fare of Great Britain was undergoing a great change and you will notice this in some of the dishes presented. (p. viii)

Many fans will be tempted to assemble a High Tea, dressed up in their finest early 20th century attire and watch re-runs. Start with High Tea Lemon Butter Biscuits (p. 12), special because citrus was costly. Pair them with Victorian Tea Cookies (p. 14), a meringue-type cookie flavored with almond extract. In the savory section, try Pickled Feta Cheese (p. 28) in honor of the poor, dead Mr. Pamuk from Season One. Or try the Poached Salmon and Cream Cheese Tea Sandwiches (p. 42) made with puff pastry rather than sliced bread, and pretend that Mrs. Patmore has made them for you.

No tea would be complete without dainty Cucumber and Cheddar Tea Sandwiches with Horseradish Cream (p. 44):

Would the Dowager Countess curl her little finger holding one of those?